Current state of Syrian refugees in Turkey discussed in Washington 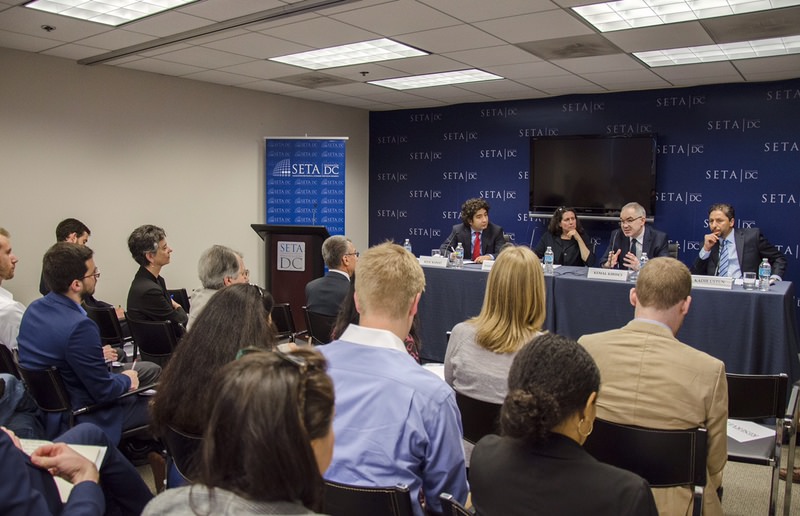 by Ali Ünal Apr 23, 2015 12:00 am
The civil war in Syria entering its fifth year with nearly 6.5 million people displaced in Syria, Turkey has been hosting nearly two million refugees escaping from the Assad regime. The refugee camps established in 10 provinces of Turkey, have been described as "five star" as it exceeds many international standards of camp conditions. On the other hand, in urban areas, the government, aid agencies and NGOs struggle to meet the needs of an-ever growing number of refugees. In this perspective, the Foundation for Political, Economic and Social Research (SETA) at Washington D.C. has organized a panel on Tuesday to discuss the refugee crisis in Turkey and its impact on social, political and economic dynamics in the country. At the panel, in which the president of Disaster and Emergency Management Authority (AFAD) Fuat Oktay has attended as keynote address, Senior Advocate of the Refugees International Daryl Grisgraber, Kemal Kirişci who is a Senior Fellow at the Turkish Industrialists and Businessmen Association (TÜSİAD) and Director of Turkey Project in Brookings and Research Director at SETA DC Kılıç Buğra Kanat have participated as panelists.

Beginning with the keynote address, Oktay have discussed AFAD's activities to care for the Syrian refugees in Turkey. He continued his statements by highlighting 'the quality of the refugee camps in Turkey in which goes above and beyond United Nations standards.' Oktay also discussed the importance of educating Syrian children, asserting that Turkey needs international support to expand its education services. He also noted that AFAD is offering aid to over 100 camps on the Syrian side of the border through the zero-point delivery system. "All nations must have an open door policy toward the refugees, including those that do not share a border with Syria," he added.

The panel continued with the comments of Grisgraber, he began by praising Turkey for its efforts to assist Syrian refugees, and added that 'Turkey is the place to be if you are a Syrian refugee due to its five-star camps and safe environment.' Grisgraber also suggested that going forward; it is essential that the international community find a way to support Turkey and other neighboring nations in keeping their borders open to refugees. Commenting on Turkey's relation with the international community regarding burden-sharing, Kirişci said the chemistry has been off. He also underlined that the Middle East is changing and the future challenge will be to navigate the new political realities, which will make delivering humanitarian aid more difficult.

Kirişci concluded his statements by saying, "The real solution to the refugee crises is a political deal that is, unfortunately, unlikely in the near future."

The Executive Director of SETA D.C. Kadir Üstün has also made notable statements at the panel, in which he asserted that humanitarian strategy cannot be separated from foreign policy. He also noted that Turkey's efforts to respond to the refugee crisis have pushed its institutions to develop more rapidly, which has been a positive outcome of the crisis. Kanat have as well added a few points following the presentations, stating that the refugees in Turkey want a political solution to the crisis because they recognize that the current situation is not sustainable. He also noted that that there is an extremely active civilian initiative in the region that has created a network of humanitarian assistance across many Turkish cities.