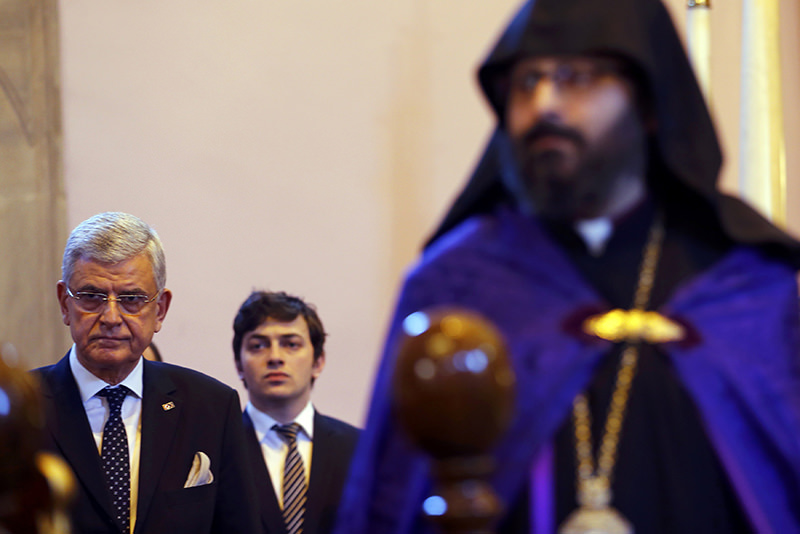 | Reuters photo
by Daily Sabah with AA Apr 24, 2015 12:00 am
Turkey's Minister of European Union Affairs and Chief Negotiator Volkan Bozkır on Friday attended the ceremony organized by the Istanbul Armenian Patriarchate held in honor to commemorate those who died during the 1915 events. Bozkır's attendance marks the first time that the Turkish government is represented at an official level in the commemoration liturgy.

As the first Turkish minister to attend such ceremony, Bozkır came to the Armenian Mother Mary Church in Istanbul early Friday and said he was honored to attend the mass to commemorate the 1915 events.

Bozkır repeated that the European Parliament's declaration of 1915 events as genocide is null and devoid for Turkey.

He also stated that Turkey acknowledges U.S. President Barack Obama's message on Thursday, regarding the commemoration of Ottoman Armenians.

"Turkey is in favor of not only investigating the 1915 events, but also studying the period from 1870s onwards" said Bozkır, emphasizing a common memory, and the need for a comprehensive research of the period in order to reach objective conclusions about a common history.

"Our desire is to live together with our Armenian brothers in peace," he added.

Greek Orthodox Patriarch Bartholomew I and Markar Esayan, a ruling Justice and Development Party Armenian-Turkish parliamentary candidate were among the participants at the ceremony, which was led by Armenian Archbishop Aram Atesyan.

The ceremony came after Turkish Prime Minister Ahmet Davutoglu released a statement Monday, offering his condolences to the grandchildren of Ottoman Armenians.

"Our desire is to live together with our Armenian brothers in peace," he added.

Patriarchate officials welcomed the presence of a minister at the ceremony. "It is quite promising and pleasing. I think it is a symbol of the positive steps that have been taken so far," said Father Tatul Anusyan, board member of the Spiritual Committee of the Armenian Patriarchate, speaking to The Anadolu Agency.

Turkey has called for the establishment of a joint commission of historians and the opening of archives to study and uncover what happened between the Ottoman Empire and its Armenian citizens.