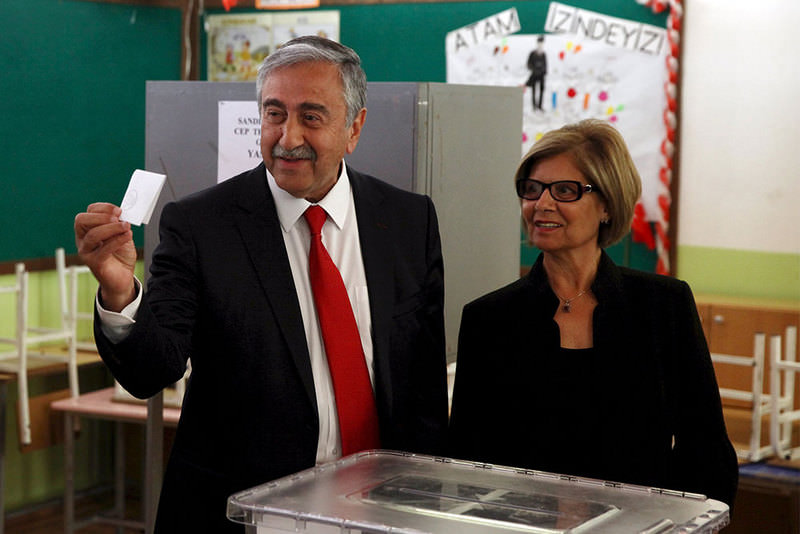 by Sinan Öztürk Apr 26, 2015 12:00 am
Independent candidate Mustafa Akıncı won the second round of Turkish Cyprus' presidential race on Sunday against incumbent President Derviş Eroğlu with 60.5 percent of the votes, according to Supreme Election Board of Turkish Republic of Northern Cyprus (TRNC).

Akıncı received 67,035 out of 113,478 votes casted, while Eroğlu received 43,764 votes. Out of the total 176,980 voters, 64 percent took the polls to determine who will represent Turkish Cypriot community in the renewed round of negotiations.

Turkish and Greek parties are preparing to return to the negotiating table under the supervision of 25th United Nations Special Adviser Espen Barth Eide to solve the 41 year-old problem, as the island is getting more strategic with oil and gas reserves around the island, adding to its strategic location between the Mediterranean and the Middle East. Akıncı based his campaign on reconciliation and solving the Cyprus issue, whereas Eroğlu is known by his staunch stance in the negotiations, which had remained futile.

Greek Cypriot President Nicos Anastasiades and Eide called Akıncı to congratulate his victory in the elections.

Mustafa Akıncı was supported by left-wing Communal Democracy Party (TDP) and United Cyprus Party (BKP) in the first round of the elections and received 26.94 of the votes. Republican Turkish Party-United Forces (CTP-BG), another left-wing party and winner of 2013 parliamentary elections with 38.4 of the votes, declared its support for Akıncı after its candidate Sibel Siber came third in the first round by receiving 22.53 percent of votes.

Veteran politician Akıncı, who has been active in politics since 1975, managed to gather swinging votes. He served as the mayor of the Turkish sector of the island's divided capital Nicosia (Lefkoşa) for 14 years between 1976 and 1990 and gained reputation through his work for the only internationally-recognized political post of the Turkish section of the island. Akıncı elected to TRNC's parliament in 1993 and later posts of deputy prime minister and minister of tourism.

Among TRNC's five districts, Akıncı received highest support in Nicosia with 66.34 percent and was ahead of Eroğlu in four districts, the only exception being İskele District located on Karpass Peninsula.

President Eroğlu, who served as TRNC's prime minister between 1985 and 2010 with brief interruptions, had received 28.15 of the votes in the first round. He was supported by the center right National Unity Party (UBP), which he chaired for 23 years consecutively and 25 years in total, and the Democratic Party-National Forces (DP-UG) alliance.

Another prominent candidate of the first round who received 21.15 percent of the votes, former Turkish chief negotiator Kudret Özersay, remained neutral for the second round.