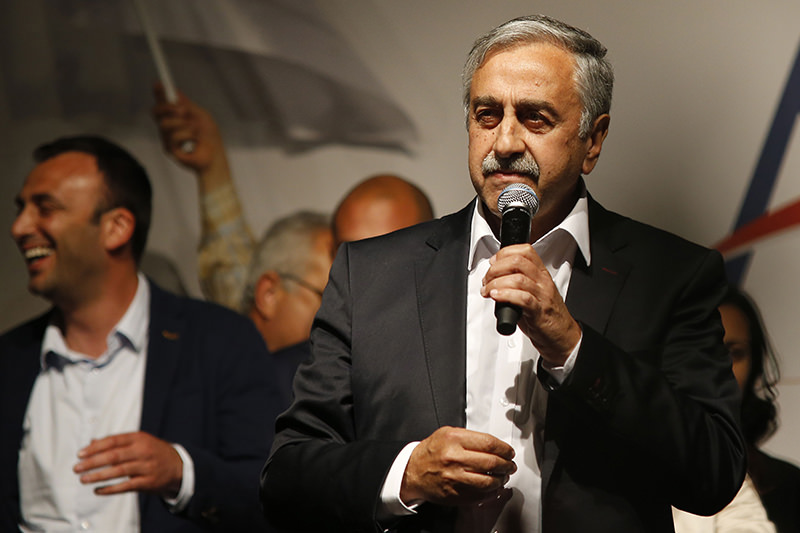 | AFP Photo
by Daily Sabah with AA Apr 28, 2015 12:00 am
The newly-elected president of the Turkish Republic of Northern Cyprus (TRNC) is expected to make his first official visit to Turkey. In an interview with the state-run Anadolu Agency, Mustafa Akıncı said: "The oath-taking ceremony is on Thursday. In the upcoming period, whenever it is most suitable for him [Turkish President Recep Tayyip Erdoğan], I will be pleased to make this visit."

Erdoğan called Akıncı to congratulate him ahead of a visit to Kuwait from Ankara on Monday. However, relations between the two nations got off to a rocky start when Erdoğan earlier criticized Akıncı's remarks about their relationship.

Akıncı, a moderate left-winger, appeared to attempt to repair any damage. "The love of the motherland is in our hearts," he said. "It has an emotive meaning." He added: "These relations are needed because the presence of the Turkish Cypriot community, who stand on their own feet and who want to have brotherly relations with Turkey, are not against Turkey."

Akıncı, who won the second-round ballot against incumbent Derviş Eroğlu on Sunday with more than 60 percent of the vote, said that rather than viewing Turkey as the "motherland," his country wanted "brotherly" ties with Ankara, drawing a rebuke from Erdoğan. Since it was founded, Turkey has called Turkish Cyprus its "child country," while Turkey is called "motherland" by Turkish Cypriots. The island is also called "mikri mas patridha" – "our small land" in Greek.

"When he says 'two sibling countries' for our relations, then it's all completely different. Mr. President [Akıncı] has to watch his words. There is a sacrifice for a child-motherland relationship. We paid a price in Turkish Cyprus. Also, the amount we spent for the continuing reconstruction of the island is around $1 billion. We never abandoned them," Erdoğan said. Akıncı immediately responded to Erdoğan's criticism, saying: "Turkish Cypriots will continue to hold their love for the motherland, but the time for leaving behind infanthood and to start crawling has come."

"Who fights for TRNC's recognition in the international arena?" Erdoğan asked, and continued by saying "I wonder if Mr. Akıncı would be able to struggle by himself."

Furthermore, Greek Cypriot President Nicos Anastasiades is to meet Akıncı on Saturday in an effort to kick-start stalled peace talks. Greek Cypriot government spokesman, Nikos Christodoulides said the two leaders would meet at lunchtime and are expected to discuss confidence building measures and the resumption of negotiations.

The meeting was agreed during a telephone conversation the two leaders had on Tuesday, said Christodoulides. On Monday, Anastasiades hailed the election of Akıncı, saying it provided hope that a peace deal could soon be reached.

The U.N. special adviser to Cyprus, Espen Barth Eide, is scheduled to arrive in Cyprus within the week and is widely expected to announce a date for the resumption of peace talks.

The ongoing dispute on the island started in the 1960s when a Treaty of Guarantee was signed between Turkish and Greek Cypriots over the island, along with the British government. The treaty stipulated that Cyprus would not participate in any political or economic union with other states, but three years later, Turkish Cypriots were ousted by force from all bodies of the new republic by Greek Cypriots. Later, Greek Cyprus claimed to be the representatives of the island calling itself the Republic of Cyprus, which is not recognized by Turkey.

All efforts by the international community to end the dispute between 1964 and 1974 failed. When the Greek side tried to annex the island in a coup in 1974, a Turkish peace mission was launched in accordance with the 1960 treaty to prevent it from happening. Cypriots went to the polls in 2004 to vote on the Annan Plan for Cyprus, which was a U.N. proposal to resolve the dispute by restructuring the island as a united republic of Cyprus. It proposed a federation of the two states that aimed to unify the Turkish and Greek Cypriot communities. The proposal was revised five times before it was put to a referendum in April 2004, and was supported by 65 percent of Turkish Cypriots and 24 percent of Greek Cypriots.