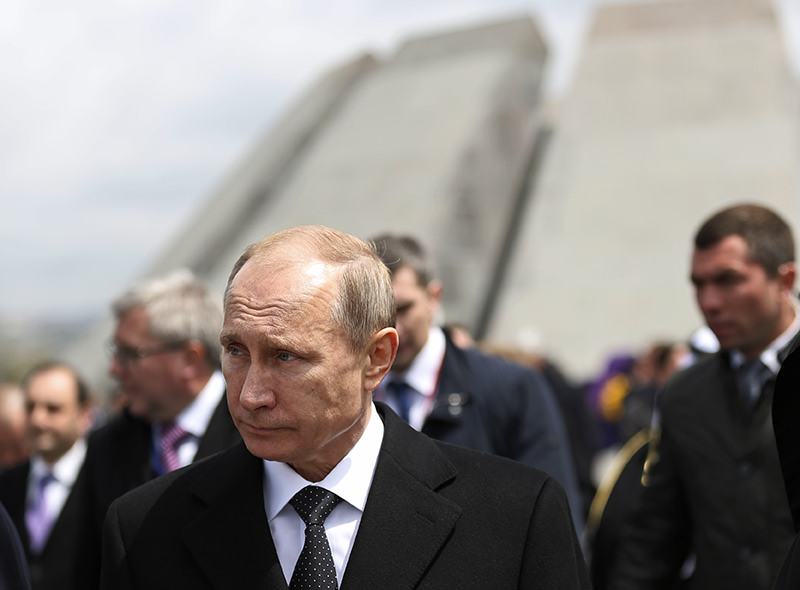 | AP Photo
by Anadolu Agency Apr 28, 2015 12:00 am
Russia hopes relations with Turkey will improve despite President Vladimir Putin's use of the word "genocide" to describe the deaths of Ottoman Armenians in 1915, the Kremlin has said.

"We hope that the further development of comprehensive cooperation is a priority [for Turkey]," Press Secretary Dmitry Peskov said on Monday, the state-run TASS news agency reported.

The description of the events of 1915 as genocide by Putin, as well as his visit to Armenian capital Yerevan to mark the centenary of the tragedy last week, led to Turkish President Recep Tayyip Erdoğan voicing his sadness at the comments.

"It's not the first time Russia used the word genocide on this issue," he said. "I'm personally sad that Putin took such a step. What is happening in Ukraine and Crimea is evident. They should first explain these before calling it genocide."

When Austria and the Vatican described the events as genocide, Ankara withdrew its ambassadors. However, Turkey did not announce any diplomatic response to Putin's comments.

Peskov, a former official at the Russian embassy in Ankara who speaks fluent Turkish, added that Putin had been told of Erdoğan's reaction.

Citing joint projects between Russia and Turkey, he added: "We have a lot to do together."

Turkey is a large consumer of Russian gas and Russia is building a multi-billion dollar nuclear power plant on the Mediterranean coast.

The Turkish government has called for the establishment of a joint commission to uncover the events of 1915, when a portion of the Ottoman Armenian population rose up to side with invading Russian forces.

In the relocation of Armenians that followed, many died although Turkey strongly refutes claims that it was genocide.