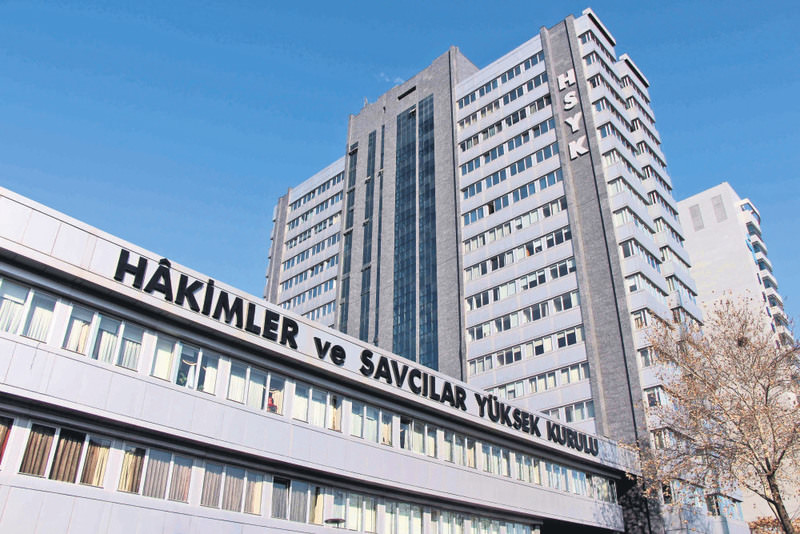 The Supreme Board of Judges and Prosecutors suspends two judges from duty and launched an investigation into their unauthorized decisions. The new judge filling the vacancy withdrew the previous decision to release the suspects, ruling it as void

A day after inspectors at the Supreme Board of Judges and Prosecutors' (HSYK) second chamber suspended judges Mustafa Özçelik and Mustafa Başer, who attempted to release Gülen Movement-affiliated Samanyolu Broadcasting Group General Manager Hidayet Karaca and 75 other detainees, an upper chamber decided on Tuesday that the investigation into the judges will continue. The head of the third chamber of the body said anyone who violates the law will receive a response. HSYK Deputy Chairman Metin Yandırmaz said: "The judges and prosecutors are tasked with executing laws. If a judge or prosecutor acts illegally, chaos will emerge. The HSYK does not let this happen. The HSYK will take the necessary steps regarding members of the judiciary who act unlawfully."

Meanwhile, a new judge who was appointed to the vacant post on the 32nd Criminal Court of First Instance withdrew Başer's decision. After assessing the demand by the public prosecutor's office to deem the decision void, the newly appointed judge who replaced Başer, Erdoğan Şimşek, accepted the demand and decided that the previous ruling was invalid and will be considered void.

Deputy Prime Minister Bülent Arınç regarded the unauthorized decisions by the judges in question as "theft of authority." "The Criminal Court of the First Instance decided to discharge the suspects," he told a press conference after a Council of Ministers meeting in Ankara. "However, this case is within the field of the Criminal Court of Peace, which declared the decision null and void." Arınç said.

"This is something seen probably for the first time in judicial history. The decision, which is to be made by the judge of the Criminal Court of Peace, was made by someone who is not authorized to do so. It may be called a theft of authority," he said.

Meanwhile, the 32nd Criminal Court of First Instance sent the suspects' file that contained the court's decision for their release to the prosecutors' office again on Monday, demanding that the decision be enforced.

"The decision to release the suspects delivered by our court is in accordance with laws, cannot be subjected to an objection and requires immediate execution. Another 10th Criminal Court of Peace's assessing our ruling and deeming it void is not in line with the judicial process," the statement read.

The incident, which has triggered hot debate among judiciary members and experts, began when Özçelik ruled for the discharge of the judge who looked into the case and handed it over to the 32nd Criminal Court of First Instance, which ruled for the release of the suspects in question, although such a decision was beyond its authority. The prosecutor's office that received the court ruling did not put it into force since, according to the code of law, a case that has on ongoing investigation can only be assessed by the Criminal Court of Peace. In that respect, the 10th Criminal Court of Peace decided that the decision to release the suspects was inapplicable and invalid for having been delivered by an unauthorized court.

Karaca and the police officers were detained on December 14 as part of an investigation, referred to as the Tahşiye case, into alleged illegal activities by the Gülen Movement, led by U.S.-based imam Fethullah Gülen. Other police officers allegedly linked with the movement were detained in operations into illegal wiretapping activities. Some are accused of forming a criminal organization in order to commit crimes.
Last Update: Apr 29, 2015 10:34 am
RELATED TOPICS