Cheating suspects may be forced to pay back wages with interest 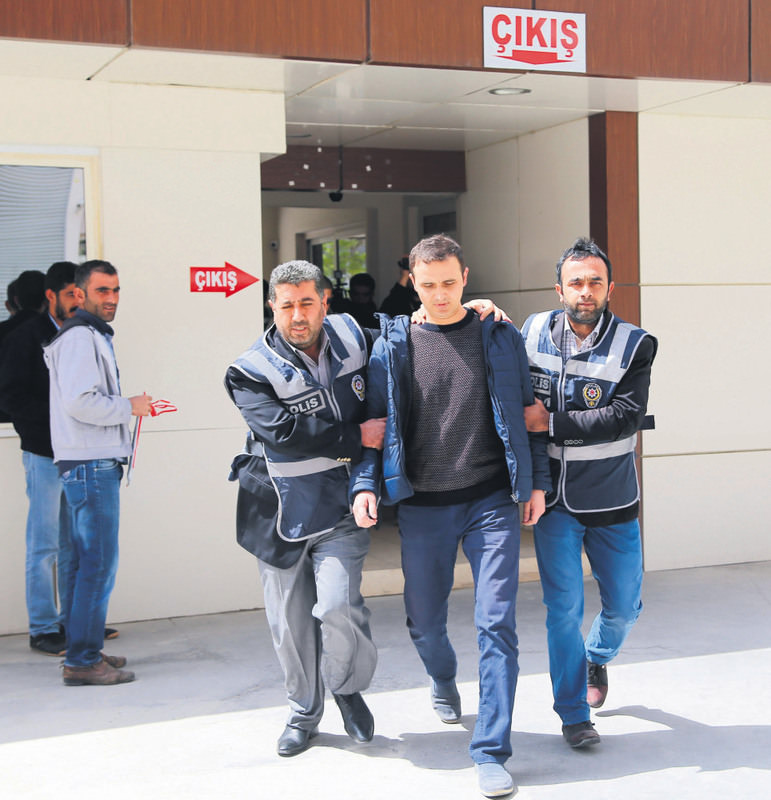 President Erdoğan has said the suspects, who are believed to have been appointed to their posts as state officials after cheating on the 2010 exam, should be required to pay back their were paid as salaries or be removed from their posts as part of the fight against the Gülen Movement, which allegedly infiltrated state institutions

President Recep Tayyip Erdoğan indicated the possibility of demanding that suspects who were implicated in alleged fraud in the 2010 nationwide Public Personnel Selection Examination (KPSS) pay back the amount they were paid as salary and removing them from duty, two proposals that are expected to be brought to the table during discussions at the meeting of the National Security Council (MGK) which was set to take place late yesterday.

"We should discuss removing them from their jobs and retrieving the salaries paid to them at interest," Erdoğan said in a question and answer session with journalists on his way back to Turkey from a visit to Kuwait. Branding the offense as "stealing someone else's rights," Erdoğan expressed determination on continuing the fight against the Gülen Movement, which is believed to have orchestrated the December 17 and December 25 operations in an apparent bid to oust the government. He said the government was keeping tabs on those who were appointed to posts in the state via the exam in question. The cheating scandal became public when the first wave of operations was conducted against dozens of suspects who are claimed to have been involved in fraud during the KPSS in 2010, an exam used to determine who will be recruited by state bodies based on their scores.

The operation resulted in the detention of 62 suspects, 30 of whom were later released. Police later launched the second wave of the KPSS cheating investigation and took 35 of 78 suspects into custody. The suspects are allegedly affiliated with the Gülen Movement and are facing charges of being members of a criminal organization, forgery, illegal and harmful activity in public institutions, destroying criminal evidence and abuse of power.

Categorizing the alleged crime of the suspects as an unjust way of achieving a post, Erdoğan is now talking about a possible step by the government to take back the salaries of those who unlawfully were assigned to their posts once the accusations of their offences are proven correct. "You are appointed to a post without deserving it and stealing someone's rights," Erdoğan said, explaining the basis of such a decision.

He presented two options for the members of the state; either that they acknowledge the authority of the state or that they'll be destroyed. He said the infiltrators will be removed from their posts and that the decision has been conveyed to Ankara ahead of the National Security Council's meeting, which will be chaired by himself.

"The parallel structure will either accept the entity of the state or perish," Erdoğan was quoted as saying. He also said that the strategy to struggle with the Gülen Movement will be the primary topic to be covered at the meeting of the MGK. The members of the movement are suspected of infiltrating the judiciary, police and other institutions of the government to purportedly hold sway over the state and they are therefore also referred to as a "parallel structure."

The MGK convened on Wednesday to discuss various topics, ranging from how best to fight with the Gülen Movement to the necessary precautions to be taken ahead of the June elections.The Gülen Movement, coined as the "parallel structure," is expected to be added in the National Security Politics document, known as the Red Book, and identified as a national threat. Foreign Minister Mevlüt Çavuşoğlu had previously said the document will be updated and the new draft was already prepared. The movement, once listed in the Red Book as an element that "threatens national security," will be officially recognized as such.

The MGK, in its previous meeting had tightened its security strategies in efforts to intensify the combat against the Gülen Movement. During future MGK meetings, the movement's field of activities will be determined and spontaneous decisions will be made. The MGK will discuss and spot the movement's activity within the judicial and/or security bureaucracy at the meetings. Once the activities are determined, the council will decide on the degree of the threat to national security.Wednesday's meeting, apart from its focus on Gülen movement, is also expected to cover the current state of the reconciliation process, regional matters and the countries that branded the 1915 incidents as "genocide."

Turkey's road map against the lobbying of Armenia will also be assessed during the meeting. In addition to this, the precautions and steps that will be taken to ensure security ahead of the June elections will also be on the table.
Last Update: Apr 30, 2015 10:45 am
RELATED TOPICS