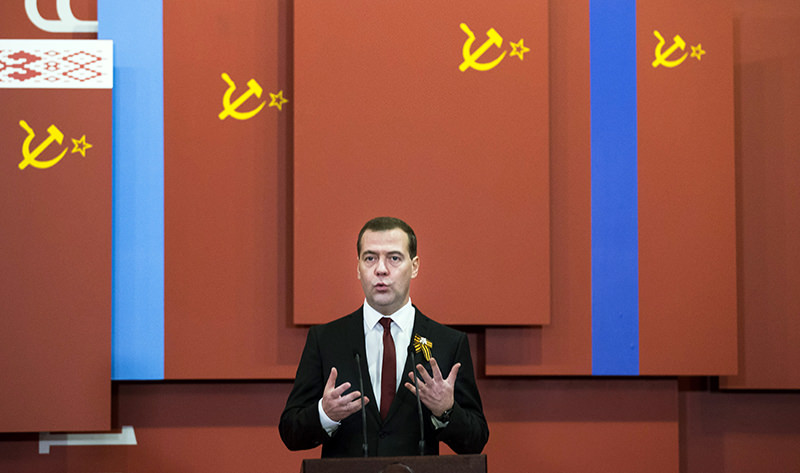 | AP Photo
by Nurbanu Kızıl Apr 29, 2015 12:00 am
Russian Prime Minister Dimitri Medvedev sent a telegram on Tuesday to his Armenian counterpart Hovik Abrahamyan, where he referred to the 1915 events as "genocide."

The message, which was published on the Russian government's official website, referred to the commemoration of 1915 events as "the Armenian Genocide" and blamed the Ottoman Empire for the incidents.

"There is no, and can be no, justification for crimes against humanity and humankind. It is the duty of each person to tenderly preserve the truth about this awful tragedy and take every effort to prevent such horror from happening again." Medvedev said in his message.

The Russian Prime Minister expressed sympathy and compassion to the Armenians on behalf of the Russian Government, but did not mention the 517,955 Turkish people in Anatolia and the Caucasus who were killed by Armenians between 1906 and 1922, according to the Turkish state archives.

A joint memorandum regarding the 1915 events issued by Duma, the lower house of the Russian Parliament on April 24 also referred to the events as "genocide" and said "We share the pain of the Armenian people and others, who were affected by the tragic events during World War I."

Russian President Vladimir Putin also referred to the events as genocide on April 23 in a letter he sent to a commemoration ceremony organized by the Armenian Diaspora in Moscow. However, on April 24, Putin refrained from using the term "genocide" during his attendance at the centenary commemorations organized in the Armenian capital Yerevan.

Putin's remarks drew ire from Turkish Prime Minister Ahmet Davutoğlu and President Erdoğan. Davutoğlu criticized Putin's attendance at the commemoration event in Yerevan and underlined that it casts a shadow on the Minsk Group's impartiality.

President Erdoğan condemned Putin's attendance and said: "I invite the countries that make genocide claims to clean up the bloody stains on their history."

The Turkish Foreign Ministry also condemned Putin's "genocide" remarks and issued a statement which read "Considering the systematic killings, deportations and the ill treatment against Turkish and Muslim people that have been committed by Russia in the Caucasus, Central Asia and in eastern Europe over the past century, we believe that the Russian president should be the one that knows best what genocide is and what its legal dimensions are," and added that it is crucial for Russia to leave its biased approach in order to help resolve the issue between Turkey and Armenia.

Kremlin Press Secretary Dmitry Peskov on Monday stated that Russia wants to improve relations with Turkey despite Putin's use of the term "genocide" to describe the 1915 events.

"We hope that the further development of comprehensive cooperation is a priority [for Turkey]," Peskov said and, referring to joint projects between the two countries, he added that Russia and Turkey have "a lot to do together."

Turkey urges for the establishment of a joint historical commission to investigate the 1915 incidents, and invites the international community and Armenia to respond to the call. Official archives of the state are also offered to historians to be used in order to reach objective and impartial conclusions about what happened during 1915.

The 1915 incidents have been a source of dispute, disagreement and the reason behind decades of strained relations between Turkey and Armenia. Armenia claims that 1.5 million people were deliberately killed, but Turkey denies these claims, saying that the historical facts do not reflect such an intention and that the deaths were a result of deportations and civil strife.