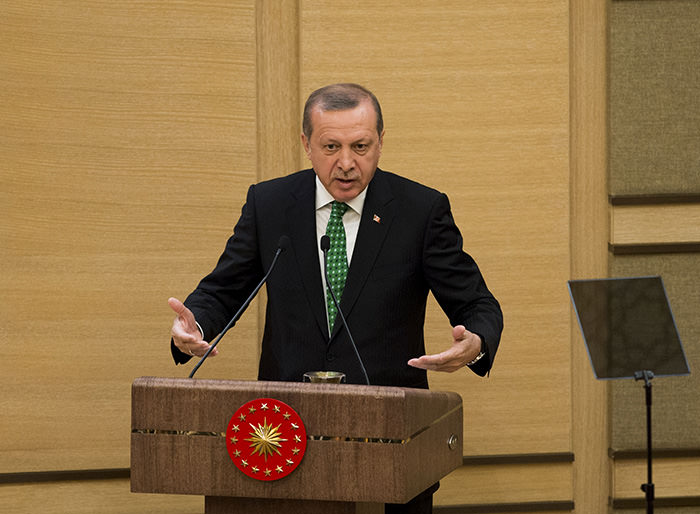 |AA Photo
by Mehmet Çelik May 01, 2015 12:00 am
President Recep Tayyip Erdoğan has received worker and labor groups from various sectors on Friday at the presidential palace in Ankara.

During his speech on May Day, the president put an emphasis on the government's efforts to improve labor conditions for Turkey's workers, and added that the insistence on rallying in Taksim Square in Istanbul is not an alternative, as it is not a suitable area for large rallies. There are more suitable arenas for rallies in Istanbul, where citizens could gather for their meetings, the president said in his speech.

"Taksim Square is not suitable for rallies, as rallying in Taksim Square would mean paralyzing transportation in Istanbul," Erdoğan said.

He also critized the West for its biased stance against Turkey, and its silence on death sentences in Egypt, saying, "Media channels who were loud on Gezi Park events are silent on Baltimore and Ferguson events."

"More than 2000 people have been sentenced to death in Egypt, but the West remains silent."

In the statement, which has put emphasis on solidarity and the role of worker's on Turkey's path to development the president said, "I wish for May 1st Labor and Solidarity Day celebrations that will be celebrated in a festival atmosphere, away from provocations, and will be conducive to strengthening brotherhood and solidarity."

President Erdoğan also said in the statement that May Day is an opportunity for workers across the world to highlight issues they face in their work place and it is an event in which they can find solutions to the problems they face as workers.