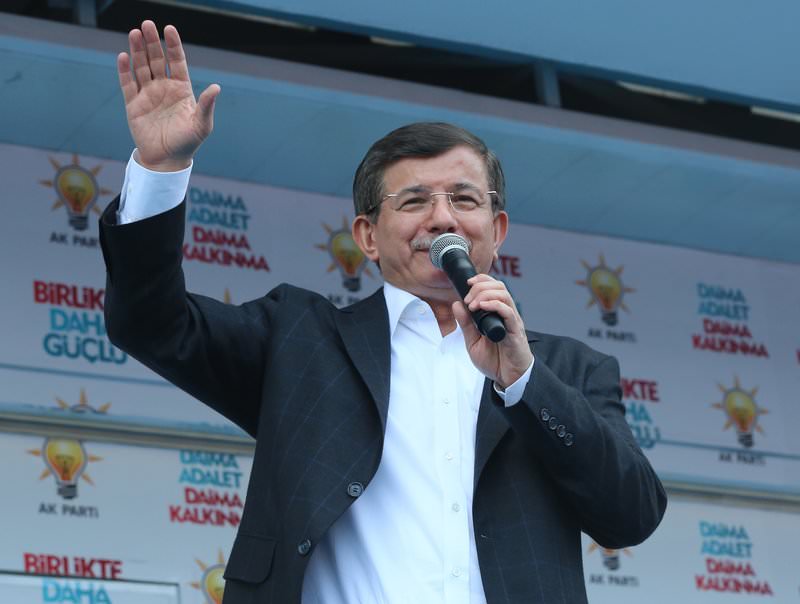 | AA Photo
by Daily Sabah May 02, 2015 12:00 am
Prime Minister Ahmet Davutoğlu has lashed out at opposition parties during an election rally of his Justice and Development Party (AK Party) in two Turkish provinces, Osmaniye and Samsun on Saturday.

Davutoğlu noted that AK Party aims to put Turkey among the most developed 10 countries, by making it a modern country with railways and airports:

"We aim to keep our flag flying across the world while CHP, HDP and MHP only aim to stop AK Party, which they never managed to do. First, they tried to use Gezi provocation and then the Gülen Movement tried to stop the party with the December 17 and 25 coup attempts, but they realized that Turkish people do not fall for these dirty games" he said.

Ahmet Davutoğlu referred to the Republican People's Party (CHP) Chairman Kemal Kılıçdaroğlu's remarks, which were about sending nearly two million Syrian refugees who fled the civil war in their country back. Davutoğlu said it contradicts Turkey's traditions and beliefs to send people seeking for shelter back, regardless of religion, ethnicity or nation.

Davutoğlu emphasized the importance of Black Sea province of Samsun as the centre of Youth Festival and stated that the AK Party increased the number of the universities across the country from 76 to 193.

Meanwhile, Ahmet Davutoğlu was appreciated after he prevented the crowd who began to howl at Nationalist Movement Party's (MHP) chairman Devlet Bahçeli in his home town, Mediterranean province of Osmaniye. "We may criticize opposition leaders, but it is not suitable to hoot or insult someone in politics,"Davutoğlu said.
Last Update: May 03, 2015 9:27 am
RELATED TOPICS