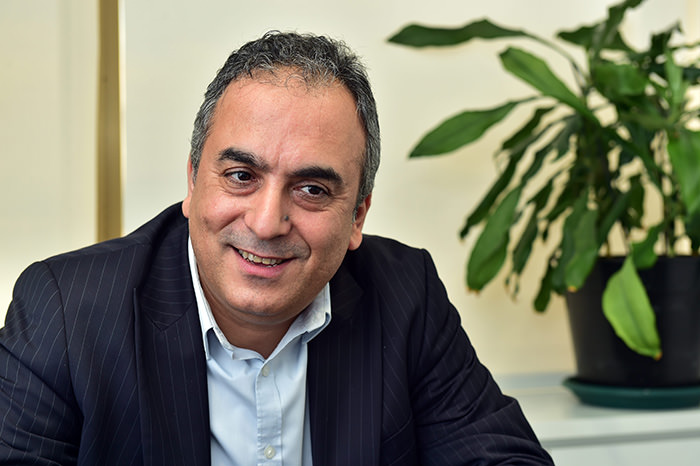 by Ayşe Şahin May 06, 2015 12:00 am
The government is maintaining its conciliatory approach toward Armenians residing in Turkey even after the campaigns of Armenia and its diaspora to brand the 1915 incidents as "genocide," which intensified in the run-up to the centennial commemorations. Days before the centennial, Pope Francis and the European Parliament (EP) acknowledged that the 1915 events amounted to a genocide, a claim that Turkey stringently denies. But despite pressure from the Armenian diaspora, Turkey has retained its efforts to ameliorate ties with Armenians in Turkey, making up for decades-long apathy to addressing their concerns. Armenians in Turkey have lauded these efforts by the government and have expressed contentment about how things have positively changed for them in terms of security, freedom and social needs.

A prominent Armenian journalist, who will run in the elections for the Justice and Development Party (AK Party), Markar Esayan said minorities have never been as well cared for as they are now, highlighting the efforts exerted by the ruling party to address their needs and ease their concerns. Branding the process as a "paradigm shift," Esayan said the change in attitude toward minorities provides them with an atmosphere stripped of threats.

"For the first time in history, those who believe in different religions do not feel intimidated due to their identities," Esayan was quoted as saying during his visit to the Agia Yorgi Church in Büyükada, one of the Princes' islands in the Marmara Sea.

In a question and answer session with journalists, Esayan said Turkey has turned a new leaf in terms of ameliorating the conditions of the minorities and sections that once faced discrimination at the hands of previous governments, and numbered an array of reparations by the current government as part of its efforts to invigorate democracy. He lauded the government's initiatives to enhance the standards of the Kurdish population and President Recep Tayyip Erdoğan's apology over the Dersim incident, which took place in the predominantly Alevi region in 1937, which resulted in the killing of over 10,000 people who rebelled against Turkey's Resettlement Law of 1934.

Esayan also mentioned Erdoğan extending condolences to the grandchildren of those who lost their lives during 1915 incidents. He said that, despite the decision by the EP and the Pope's remarks, Prime Minister Ahmet Davutoğlu expressed condolences for the incident which he said highlights Turkey's determination to pursue peace efforts with Armenia.

"Erdoğan issued such a message last year [when he was the prime minister]. The government did not take a step back this year despite all the negative instances. As humane and as mature as before. This is a self-confident state policy," Esayan said. Turkish officials have been reiterating that although Armenia fails to reciprocate their peace offers, it will continue with its efforts to reconcile.

"Decisions by the parliaments do not make my life better over here, nor do they help my psychology. The Armenians here are aware of this, and the effects of these [decisions] will gradually fade away," Esayan said.

Minorities in Turkey, who have lived in the country since its foundation, have previously faced difficulties securing their most basic needs of security, having a place to live and freedom to practice their religion. Now the needs and problems of these groups that have long-suffered from isolation in the place they call home, are finally being addressed.

An Armenian lawyer, Simon Çekem, also said compared to previous governments, the AK Party has progressed much in the sphere of improving minorities' lives and removing discrimination against them.

After decades of apathy, which has often extended to animosity, by the previous ruling parties since the foundation of the Turkish Republic, the current ruling party, which has been in office for three terms, has taken up the subject and launched significant work that has come as a relief to minorities in Turkey. The AK Party is acting more confidently in admitting that there have been past wrongdoings against minorities. In doing so, it is detaching itself from previous ruling parties in both ideology and governmental policies and refuses to see itself as successor to the Republican People's Party (CHP), who presided over a single-party term during which the confiscation of minorities' properties occurred.

"The return of the confiscated properties is still ongoing. In old times the churches were being brought down. We could not even drive a nail, let alone the lack of assistance by the government, we ourselves could not touch them with our own money.

"Our citizens for the first time feel like the citizens of the country and walk outside in safety without feeling threatened due to their identities," Esayan said.
Last Update: May 06, 2015 5:47 pm
RELATED TOPICS