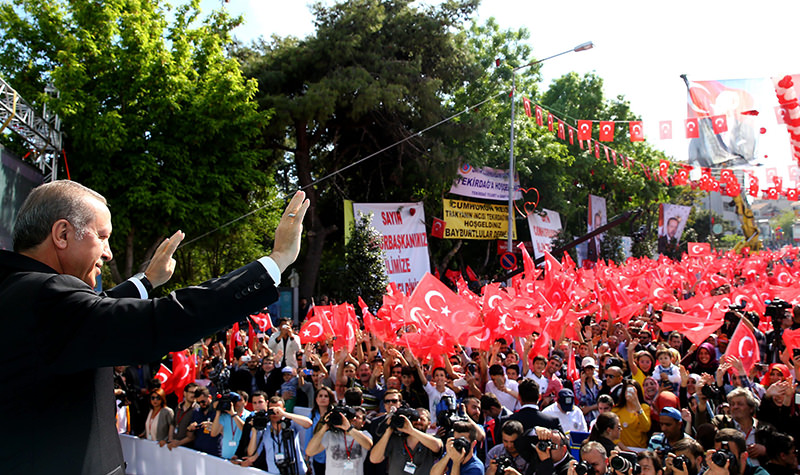 The pro-Kurdish Peoples' Democratic Party (HDP) had lodged a complaint that Erdoğan, one of the founders of the ruling Justice and Development Party (AK Party), had broken restrictions that forbid the president from becoming involved in party politics.

On Tuesday, within hours of the complaint being brought, the 11-strong Supreme Election Board issued a ruling dismissing the complaint unanimously.

In the run up to the June 7 parliamentary election, Erdoğan has been giving speeches at opening ceremonies across Turkey. He has often used these speeches to promote the presidential system that he wants to introduce and which is opposed by the main opposition parties.

In doing so, Erdoğan, who served as prime minister for the maximum three terms before becoming president in August last year after he won Turkey's first popular vote for the post, has mentioned the number of parliamentary seats the AK Party needs to secure such a constitutional change.

The HDP claimed Erdoğan was acting "against his constitutional impartiality" and "as if he were the leader of the ruling party." It called for the election board to issue a warning to Erdoğan over his comments.

The party also claimed that Erdoğan was deliberately targeting opposition leaders and using religious symbols in an "exploitative" manner.

The HDP, whose co-chairman Selahattin Demirtaş won 9.76 percent of the vote in August's presidential election, could enter parliament as the fourth largest party.

It needs to pass a 10 percent national threshold to be eligible to win seats and if successful could dent the AK Party's dominance of Turkey's southeast, home to most of the country's Kurdish population.

In April, seven nationwide polls put the HDP's share of the vote at 8.9 to 11.4 percent.