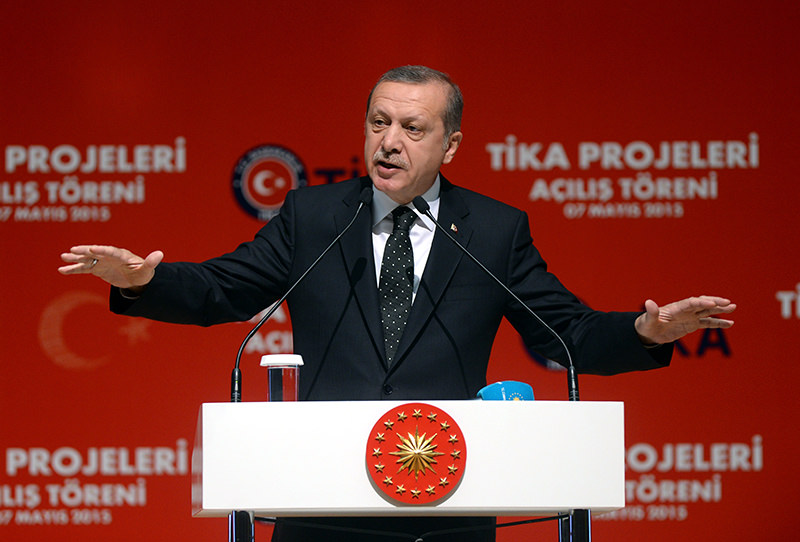 | AA Photo
by Nurbanu Kızıl May 07, 2015 12:00 am
President Recep Tayyip Erdoğan underscored on Thursday that Turkey will keep its doors open to the destitute despite opposition.

Speaking at the mass opening ceremony of complexes restored by the Turkish Cooperation and Coordination Agency (TİKA), President Erdoğan highlighted Turkey's contribution in addressing the needs of the destitute through activities conducted by TİKA. Erdoğan stated that TİKA's has become a symbol of hope and trust for people in five countries.

"In our tradition, we do not close our doors to guests" the President said, referring to the main opposition Kemal Kılıçdaroğlu's remarks that they will send Syrian refugees back if they win the elections. "Our ancestors have opened their doors to the Jews who escaped from the persecution carried out during the Spanish Inquisition 500 years ago" he said, and added that Turkey will never ask refugees to leave the country. He stated that Turkey has a humanitarian responsibility to assist the needy and that we should not take the West's ignorance - regarding the issue of refugees - as an example.

The Turkish President noted that Turkey is capable of providing aid to 140 countries, and has proudly embraced the needy throughout the region. He stated that Turkey has spent $5.6 billion dollars for the Syrian guests who have taken refuge in the country and will continue to support the needy.

Erdoğan harshly criticized those who oppose the renovation of abandoned mosques and Islamic architecture and accused them of having no honor. The remarks were a direct response to Defna Halman, an actress who called everyone to stand up against the restoration of the masjid at the historical Rumelia Fortress during an awards ceremony this week. He said that he had tried to restore the masjid during his tenure as the mayor of Istanbul, but had faced legal opposition and the complex was turned into a concert hall.

"Restoring the masjid at Rumelia Fortress is about protecting our history" Erdoğan said, adding that Turkey has restored various historical monuments and sites throughout the world.

"Those who do not protect their past cannot have a future, nations which fail to protect their history are doomed to crumble" Erdoğan said, adding that the historic masjid within the Rumelian Fortress, which had been destroyed and abandoned, will be restored despite opposition as it was entrusted by Sultan Mehmed when he conquered Istanbul in 1453.

The Turkish president also panned the opposition for questioning why Turkey does not have ambassadors in some countries. "It is true we don't have an ambassador in the country that has made life a dungeon for Palestinians" Erdoğan said, referring to Israel which currently has a blockade over the Gaza Strip. "Shouldn't we have taken any attitude towards them?" he asked.

Erdoğan went on to note that the other country where Turkey does not have an embassy is Syria. "The country of an oppressor which has massacred about 350,000 people" he noted and added that Turkey does not have respect for those who do not respect the will of the Egyptian public. He slammed the Republican People's Party for siding with oppressors rather than the oppressed and presenting this as "foreign policy" and not having a clue about what is going on in Libya.

The Turkish President inaugurated a number of projects carried out and funded by TİKA in Kosovo, Gaza, Pakistan, Kyrgyzstan and others.