EU 'concerned' over attack on Turkish cargo ship in Libya 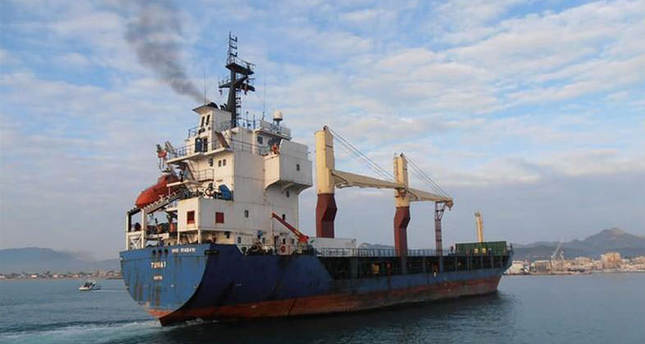 by Anadolu Agency May 11, 2015 12:00 am
The European Union has expressed "concern" on Monday over an attack on a Turkish cargo ship off the coast of Libya's port city of Tobruk, in which a Turkish officer was killed and several crewmembers injured on Sunday.

European Commission spokeswoman Catherine Ray told reporters in Brussels on Monday: "We are concerned about what we have read and our sympathies are going (to those affected) over the reported loss of life and injury but at this stage we are investigating further information."

The ship was first attacked by artillery fire and was targeted again in two separate airstrikes, Turkish Foreign Ministry said in a statement on Monday.

"The Tuna-1 ship flagged with Cook Island was attacked in international waters about 13 miles [21 kilometers] off the coast of Tobruk, when it was carrying a drywall cargo from Spain," the ministry said in a statement.

When the ship tried to leave the region after the artillery attack, it came under two separate airstrikes that resulted in the death of a Turkish citizen, who was the ship's third officer; other crew members also received injuries, the statement added.

"We wish God's mercy on our citizen who lost his life. We strongly condemn this heinous attack perpetrated against a civilian ship in international waters and we curse the attackers," the statement said.

Turkey protested the "atrocious attack" with the Libyan authorities and demanded an immediate end to attacks on its affected ship and other Turkish ships in the region.

Turkey would also take legal actions against those responsible for the attack in accordance with international law; Turkey also reserves the right to demand compensation, the statement added.
Last Update: May 11, 2015 7:11 pm
RELATED TOPICS