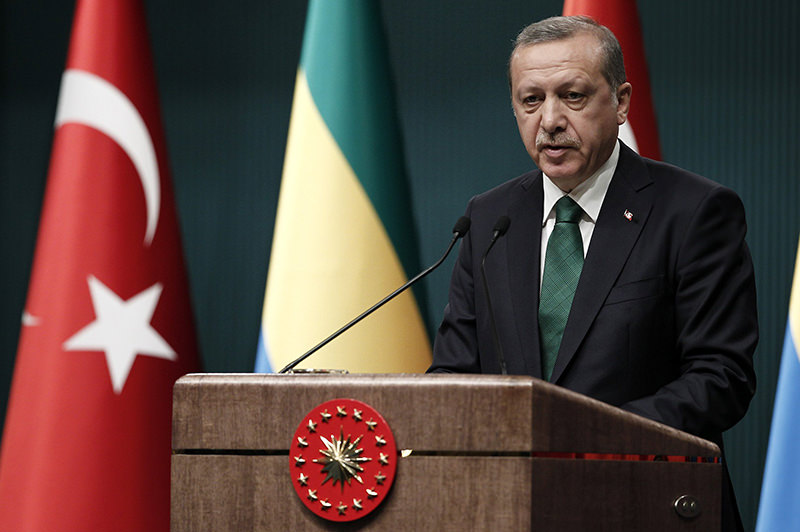 | AA Photo
by Ayşe Şahin May 13, 2015 12:00 am
As Turkey still seeks an explanation for the deadly attack on the Turkish cargo ship by forces of Libya's internationally recognized government on Sunday off the Libyan coast, President Recep Tayyip Erdoğan said the government will keep tabs on the matter within the framework of its legal rights. Erdoğan also said things "would have been different" if the vessel was flying a Turkish flag, in a veiled implication that the attack would then have been reciprocated with a harsher response.

"We will track the issue to the end and monitor the process closely with our rights reserved. Those responsible for the attack should urgently be found," Erdoğan was quoted as saying late on Tuesday at a joint press conference with Gabonese President Ali Bongo Ondimba.

The Turkish cargo ship was hit by artillery fired off Libya's coast late on Sunday, an attack claimed by the air force of Libya's internationally-recognized Tobruk government. Foreign Minister Mevlüt Çavuşoğlu condemned the attack, which killed the ship's third officer and caused injuries to the staff, in a statement released on Monday. The vessel was considerably damaged as a result of the attack. It was also highlighted that while the ship had been trying to leave the area of artillery attack, it was the target of two additional subsequent air attacks.

The ministry denounced the attack and called for immediate action against the perpetrators. However, the Libyan government, in an apparent bid to dodge responsibility, gave a different account of the incident to Turkish officials. The Foreign Ministry said the Cook Islands- chartered Tuna-1 cargo ship, which departed from Spain to transport drywall cargo to Tobruk, was 21 kilometers away from its destination when it was shelled in international waters. Libyan authorities, however, claimed that the vessel was given a warning to not approach the city of Derna, which is under the sway of the Islamic State of Iraq and al-Sham (ISIS).

Libyan military officials had previously given a strong warning that any ship that attempts to head for Derna would be attacked as they fear that supplies might reach the militant group. However, Libya's assertion that there had been a warning before they targeted the vessel has been refuted by the second captains of the vessel who survived the attack.

In a statement to the prosecutor's office which looked into the incident, the second captain said that there had been no warnings issued by the Libyan government. "There was no warning, [I know] because it was my shift. I am the second captain. They did not warn us whatsoever. What they bill as warning is possibly bombing," Second Captain Zafer Kalaycı said.

Following the attack, the ship landed in the port of Fethiye, a southern Mediterranean district in Turkey. The injured were taken to hospital and the prosecutor's office launched an investigation into the incident. Statements from the crew were taken as part of the investigation.
The vessel did not have a Turkish flag and was chartered as being from the Cook Islands although the ship is Turkish-owned and the crew was predominantly Turkish citizens.

"Above all, a ship cannot be attacked on a tip-off. The ship was not registered to Turkey, but its owners are Turkish. We have harshly condemned the attack. Things would have been different if the vessel was flying a Turkish flag, that's another matter," Erdoğan said.

Nevertheless, he added that a proper government would have stopped the vessel with coastal boats, taken it to port, opened the containers and seen if they had weapons or not.

"They have not become a state yet, thus they resort to such means," Erdoğan said.

Libya has been in turmoil since an uprising ended the rule of autocratic leader Moammar Gadhafi in late 2011. Since then, sharp political divisions emerged which have yielded two seats of government in the country which operate their own institutions.

The attack has caused distress not only for Ankara, but also caught the attention of the international community. The EU expressed concern on Monday over the attack.

European Commission spokeswoman Catherine Ray told reporters in Brussels on Monday: "We are concerned about what we have read and our sympathies go [out to those affected] over the reported loss of life and injury, but at this stage we are investigating further information."

The U.N. on Monday also condemned the attack.

The U.S. also expressed concern over the incident. US State Department spokeswoman, Marie Harf sent condolences to the family of the captain who was killed in the attack. She also said she hoped for a "quick recovery" for the injured crew.