Turkey's President Erdoğan: 2023 targets can only be reached with a presidential system 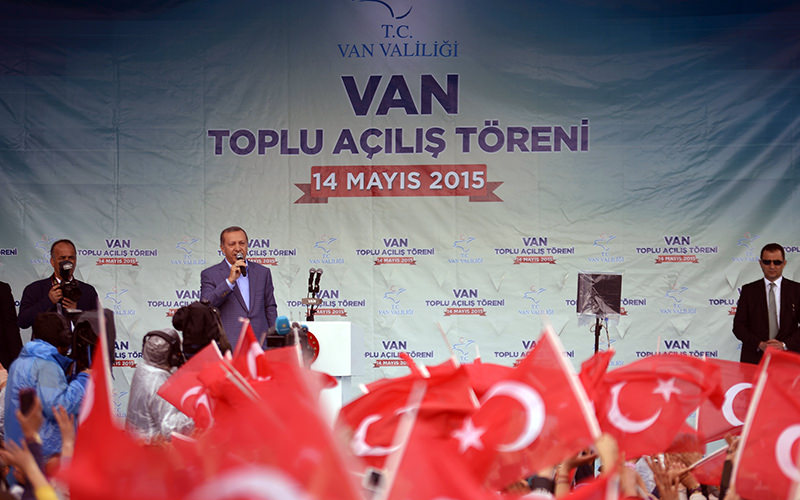 | AA Photo
by Daily Sabah May 14, 2015 12:00 am
President Recep Tayyip Erdoğan has said the government's 2023 targets, which form the basis of what he calls the "New Turkey" can only be achieved with the presidential system, in his speech in the predominantly Kurdish province of Van. Since Erdoğan became the first directly elected president of Turkey he has been reiterating the benefits of shifting from the parliamentary to a presidential system. He repeats at every chance that the current system cannot adapt to the altering global order and that a presidential system will eliminate obstacles to speedy execution of decisions.

"In order for Turkey to reach its 2023 goals, it has to adopt a new system," Erdoğan told a rally of supporters. A presidential system and a new constitution have been billed as part of the vision of a new Turkey. The notion, which was coined by Erdoğan in his reference to the improvement Turkey has gone through in terms of economics, politics and social issues, constitutes Erdoğan's dream of bringing the country to a higher level. Erdoğan says Turkey needs to go through a transformation regarding its administration in order to adapt to global changes and introduce further innovations, which is also a major part of the plans concerning a new Turkey.

Throughout modern Turkey's history, the governmental system has been a hotly debated issue that began with the eighth president, Turgut Özal, continued with the ninth president, Süleyman Demirel and has been reinforced by Erdoğan, who asserts that a presidential system is more applicable to the country's political structure.

Erdoğan has been focusing on what he calls a new Turkey in reference to the progress Turkey has made. Economic improvements, the reconciliation process the government launched in a bid to end Kurdish conflict between the PKK and the state all contribute to his vision of a new Turkey. He also underlined the necessity of change in the Constitution for adapting to the norms of a new Turkey. He has claimed that the current parliamentary system has been a hindrance for the efficient execution of policy and that a shift to a presidential system is necessary to adapt to global changes.

When Erdoğan took the presidential office on August 10 last year, with the nation directly electing a president for the first time, he specifically highlighted that he intended to change the political structure. Currently, the president only has ceremonial duties, but Erdoğan pledged to be a more active president during his tenure. The Justice and Development Party (AK Party) reiterated that it aims to receive the constitutional majority to establish a presidential system.

"We can put decisions into force swiftly only with speedy execution mechanisms, which is a presidential system. I have experienced this throughout the three terms I was prime minister. I can see where there are problems," Erdoğan said.