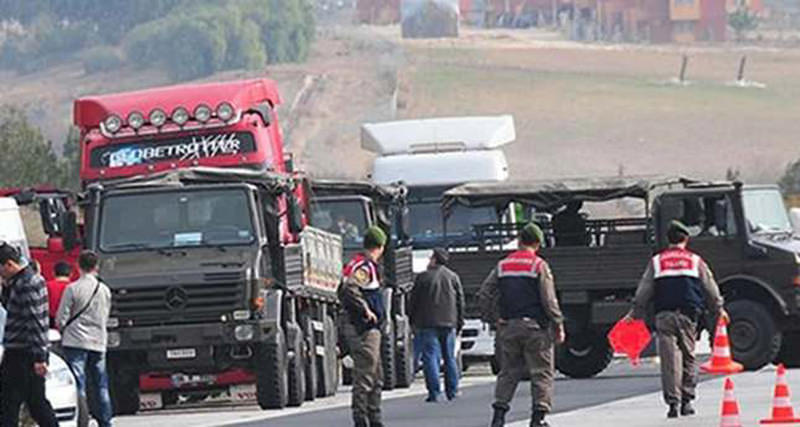 Detention warrants have been issued for 10 army officers as part of an ongoing investigation into a 2014 operation allegedly ordered by a Gülenist prosecutor into the intelligence agency’s trucks that were carrying aid to Turkmens in Syria. Five of the officers were taken into custody in Ankara on Friday afternoon

Detention warrants have been issued for 10 army officers including high ranking officers on active duty on Friday over a 2014 incident in which trucks belonging to the National Intelligence Organization (MİT) were stopped and searched near the Syrian border.

In 2014, security forces intercepted MİT trucks upon an order by a prosecutor allegedly affiliated with the Gülen Movement over claims that they were carrying weapons to Syria. The unauthorized operation, which amounted to a violation of national security, led to an investigation by the Istanbul Chief Public Prosecutor's Office, which accuses the suspects of exploiting their positions and being members of a criminal organization. The prosecutors who ordered the interception of the trucks are accused of attempting to spark a crisis in the country and are currently under arrest for their alleged involvement in the operation.

An former gendarmerie commander and four prosecutors were arrested in early May for allegedly violating national security in the incident. The arrests came a day after the Second High Criminal Court in the southern district of Tarsus issued arrest warrants for Adana's former provincial gendarmerie Commander Özkan Cokay, former Chief Public Prosecutor Süleyman Bağrıyanık and Prosecutors Özcan Şişman, Aziz Takcı and Ahmet Karaca.
Earlier this year, the Supreme Board of Judges and Prosecutors (HSYK) decided to suspend Bağrıyanık, Karaca, Takcı, Özcan Şişman and Yaşar Kavalcıklıoğlu from duty until the investigation is completed.

In January 2014, trucks belonging to MİT carrying aid to Turkmens were stopped by security forces upon an order from then Adana Public Prosecutor Şişman. The supplies in the trucks were seized and MİT staffers were handcuffed before they were detained, which prompted the government to reform its intelligence laws in an effort to avoid such situations in the future. The governor of the province was informed about the incident in its latest phase, and many believe the operation was aimed at creating a political crisis by joint efforts of the Gülen Movement and anti-government media outlets that made the incident public, despite its highly confidential status.

An Istanbul court ruled in April for the arrest of 17 high-ranking military officers on charges of stopping and raiding the MİT trucks.

Last month, an Istanbul prosecutor ordered the detention of 34 high-ranking members of the army, including those who were tasked with stopping and raiding the trucks on charges of spying. Istanbul Public Deputy Prosecutor İrfan Fidan, who looked into the alleged offense, said 24 of the 34 officers were detained.

Sixteen of the 34 officers were reported to be assigned to the southern province of Adana where the MİT trucks were intercepted by security forces on the order of a prosecutor who allegedly acted on a tip that the trucks were full of ammunition to be delivered to a terrorist organization. The operation that subsequently detained the MİT trucks is believed to be a plot hatched by the Gülen Movement in order to spark a crisis. As more details have been unveiled pertaining to the matter, the possibility that the operation was preplanned and conducted by members of the Gülen Movement in the police and judiciary in an attempt to defame the government, which it considers its foe, strengthened, prompting the prosecutor's office to investigate the incident.

The majority of the suspects in question had lawsuits filed against them on spying charges by the Deputy Public Prosecutor's Office, and following the operation, the prosecutor who investigated the incident sought 15 to 20 years in prison for the members of the military who were allegedly involved in stopping the MİT trucks for "obtaining confidential state information to be used for political and military spying" and life sentences for making them public. The indictment the prosecutor prepared was later submitted to the Adana 7th High Criminal Court where the trial is currently being held.

The Gülen Movement is seen as a threat to national security by Ankara as is accused of infiltrating top state institutions, including the police and judiciary, and wiretapping thousands of people including senior officials, journalists, actors and others.

Fethullah Gülen, who lives in self-imposed exile in the U.S, is accused of leading a criminal organization and officials have reported that sufficient solid evidence has been discovered to prove the crimes he is accused of. The movement has been under scrutiny in numerous countries including Russia, the U.S, Azerbaijan and Germany.
Last Update: May 15, 2015 8:22 pm
RELATED TOPICS