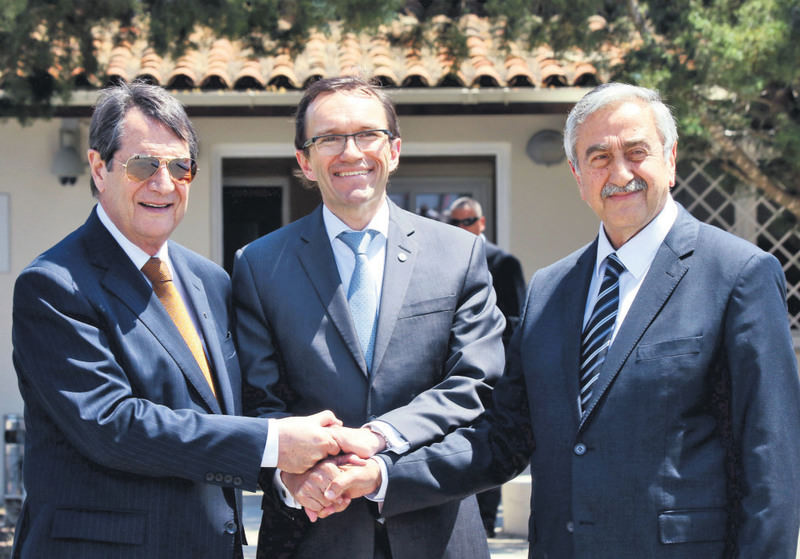 Turkish and Greek Cypriot leaders met with U.N. Special Envoy Eide on Friday and held a four-hour of meeting for a permanent solution on the island. The two leaders are scheduled to meet on May 23 to further the ‘promising' peace talks and bring a resolution to the decades-long dispute by the end of the year

Turkish Cypriot President Mustafa Akıncı and Greek Cypriot President Nicos Anastasiades met with the U.N. Special Adviser for Cyprus Espen Barth Eide at the U.N.'s office on the island on Friday to resume the peace negotiations that were halted last year. "I have high hopes for our prospects and the future," Anastasiades told reporters before the meeting. Following Akıncı's election victory, the peace talks aim at reaching a resolution in December. However, Turkish officials said that a permanent solution is likely to happen by September. After a four-hour meeting, reporters faced smiling faces and positive remarks from the Cypriot leaders. "They shared their vision for a united Cyprus," Eide told journalists. "In the prevailing climate of optimism, and encouraged by the momentum that is building across the island, the two leaders underscored their shared will to reach a comprehensive settlement."

In a sign of mutual commitment to peace, the two leaders agreed to work on a number of steps aimed at building confidence, Eide said. As a small first step on Friday, Anastasiades disclosed the coordinates of 28 minefields dotting a mountain range in the north. Akıncı announced that people crossing any of the seven north-south checkpoints along the U.N.-controlled buffer zone will no longer need to fill out a form, speeding up the process. Thousands of people cross daily through seven checkpoints along a buffer zone across the island. Dropping the visa forms is expected to ease bottlenecks at checkpoints.

Anastasiades said more of such steps may be announced on May 28 when he meets Akıncı again. The two leaders will meet socially on May 23 to show their "unity in promoting a mutually acceptable" peace deal, Eide said.

Foreign Ministry spokesman Tanju Bilgiç said there are expectations that "a fair, lasting and comprehensive" deal will be reached this year. "Our priority is a solution in which the political equality of the Turkish Cypriot side is guaranteed. We want this issue to be resolved as soon as possible within the U.N. framework of negotiations. We also expect 2015 to be the year of resolution, because the U.N. has run negotiations like this several times before," he said.

U.N. Secretary-General Ban Ki-moon welcomed the resumption of talks between Greek and Turkish Cyprus in a statement. "[Ban] calls on the leaders to seize this opportunity to achieve tangible progress towards a comprehensive settlement that would clearly benefit both Greek Cypriots and Turkish Cypriots," the statement said.

"I wish … for the good of both communities," Akıncı posted on Twitter before the talks. "I hope today will be the beginning of a bright future for all Cypriots and for our country," Anastasiades tweeted.

Friday's meeting was held at a United Nations compound in the Cypriot capital of Nicosia within view of a crumbling airport terminal abandoned in fierce fighting in 1974. On the basis of previous agreements, a reunification deal would create a two-state federation, one Greek Cypriot and the other Turkish Cypriot.

Negotiations between Turkish and Greek Cyprus resumed in February 2013after a two-year pause, but Greek Cyprus suspended negotiations after Turkey sent a hydrocarbon exploration vessel off Greek Cyprus' southern coast in October of last year. Turkey later called the ship back.Turkey is the only nation to recognize Turkish Cyprus while the majority of the international community recognizes Greek Cyprus, which is a member of the EU. Turkey applied for EU membership in 1987, but the Cyprus issue remains a major obstacle in Turkey's bid to join the 28-country bloc. To gain membership, Turkey must successfully conclude negotiations with the EU in 35 policy areas, or chapters, which include reforms and the adoption of European standards. So far, 14 chapters have been opened while 17 remain blocked and another four have yet to be discussed.

The Cyprus issue has remained on the agenda between the Greek and the Turkish parts of the island since a Greek Cypriot coup was followed by a Turkish peace mission to aid Turkish Cypriots in the north in 1974.

The ongoing dispute on the island started in the 1960s when a Treaty of Guarantee was signed between Turkish and Greek Cypriots along with the British government over the island. The treaty stipulated that Cyprus would not participate in any political or economic union with other states, but three years later, Turkish Cypriots were ousted by force from all bodies of the new republic by Greek Cypriots. Later, Greek Cyprus claimed to be the representative of the island as the Republic of Cyprus, which is solely not recognized by Turkey. All efforts by the international community to end the dispute between 1964 and 1974 failed. When the Greek side tried to annex the island in a coup in 1974, a Turkish peace mission was launched in accordance with the 1960 treaty to prevent it. Cypriots went to the polls in 2004 to vote on the Annan Plan for Cyprus, which was a U.N. proposal to resolve the dispute by restructuring the island as a United Republic of Cyprus. It proposed a federation of the two states that aimed to unify the two communities. The proposal was revised five times before it was put to a referendum in April 2004 and was supported by 65 percent of Turkish Cypriots and 24 percent of Greek Cypriots.