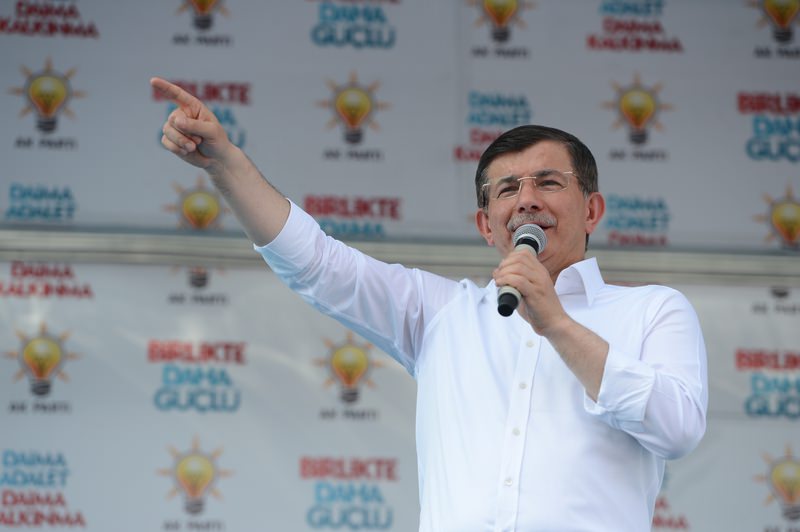 by Anadolu Agency May 16, 2015 12:00 am
Egypt is repeating a disdainful period of history that Turkey itself witnessed 55 years ago, when coup plotters executed an elected leader, Turkish Prime Minister Ahmet Davutoğlu said on Saturday.

Addressing an election rally in the western Bursa province, Prime Minister said: "A disdainful, painful period that happened in Turkey 55 years ago is now being repeated in Egypt."

Menderes was first jailed and made to stand on trial before being executed along with two ministers, Hasan Polatkan and Fatin Rüştü Zorlu, following the 1960 coup.

Davutoğlu pledged that no president or prime minister would ever again be sent to the gallows in Turkey.

He also slammed a headline about the Morsi story posted on the Doğan Media Group's news website that allegedly said: "Mursi, president with 52 percent votes, sentenced to death".

The premier asked the meaning of choosing such a headline. "What do they mean? If they mean [to refer to] our President Recep Tayyip Erdoğan, who became president with his 52 percent votes, then they should know that no president or prime minister will be sent to gallows again in these soils," Davutoğlu said.

He pledged to protect democracy under any circumstances.

The remarks came after an Egyptian court Saturday referred 122 out of 166 defendants, including Morsi to the country's grand mufti to consider possible death sentences against them over charges of jailbreak and espionage charges.

Morsi's family did not attend Saturday's trial session, citing "their rejection of the legitimacy of the trial."

He is the first president to be referred to the country's grand mufti in Egypt's history. The opinion of the mufti is non-binding, but Egyptian law makes it necessary for judges to seek a religious point of view on any death sentence.

Last month, Morsi and 12 codefendants were sentenced to 20 years in prison each for allegedly mobilizing supporters to "intimidate, detain and torture" dozens of anti-Morsi protesters during clashes outside eastern Cairo's Ittihadiya presidential palace in December 2012.

Morsi currently faces multiple criminal trials on charges that include espionage and "insulting the judiciary," charges he says are politically motivated.

Since Morsi's ouster, Egyptian security forces have launched a relentless crackdown on dissent that has targeted both Islamists and secularists, leaving hundreds dead and thousands behind bars.
Last Update: May 16, 2015 9:03 pm
RELATED TOPICS