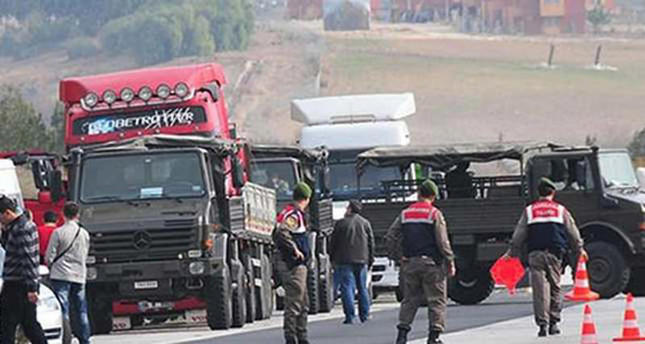 by Daily Sabah May 17, 2015 12:00 am
Out of the ten detained army officers, seven were arrested on Sunday as part of an ongoing investigation into a 2014 operation allegedly ordered by a Gülenist prosecutor into the intelligence agency's trucks that were carrying aid to Turkmens in Syria.

Detention warrants had already been issued on Friday for the 10 army officers including high ranking officers on active duty. After hearings that lasted all day on Sunday, three military officers were allowed to go free while seven were arrested and will now be sent to prison.

In 2014, security forces intercepted Turkey's intelligence organization MİT's trucks upon an order by a prosecutor allegedly affiliated with the Gülen Movement over claims that the trucks were carrying weapons to Syria.

The unauthorized operation, which amounted to a violation of national security, led to an investigation by the Istanbul Chief Public Prosecutor's Office, which accused the suspects of exploiting their positions and being members of a criminal organization. The prosecutors who ordered the interception of the trucks were then accused of attempting to spark crisis in the country and are currently under arrest for their alleged involvement in the operation.

The Gülen Movement is seen as a threat to national security by Ankara as is accused of infiltrating top state institutions, including the police and judiciary, and wiretapping thousands of people including senior officials, journalists, actors and others.

Fethullah Gülen, who lives in self-imposed exile in the U.S., is accused of leading a criminal organization and officials have reported that sufficient solid evidence has been discovered to prove the crimes he is accused of. The movement has been under scrutiny in numerous countries including Russia, the U.S., Azerbaijan and Germany.