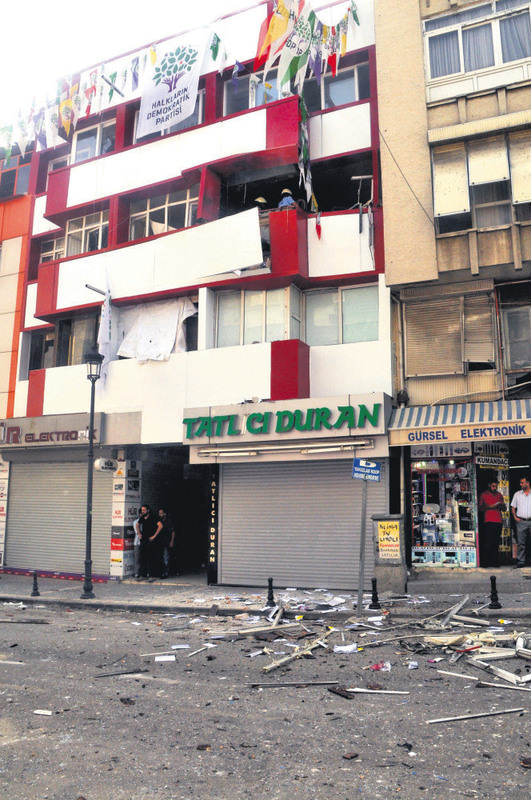 Several people were hurt after the simultaneous explosions at the pro-Kurdish HDP provincial headquarters in the southern provinces of Adana and Mersin. The ‘provocative’ attacks were strongly condemned by PM Davutoğlu and other government officials

Following the simultaneous explosions at the pro-Kurdish Peoples' Democratic Party (HDP) provincial headquarters in the southern provinces of Adana and Mersin on Monday involving suspicious packages containing stun grenades, Prime Minister Ahmet Davutoğlu strongly condemned the attacks during an election campaign rally in the central province of Karaman on Monday. Meanwhile, opposition parties tried to exploit the attacks to score points against the government. In addition to Davutoğlu's condemnation, Presidential spokesman İbrahim Kalın condemned the attacks at a press conference on Monday, saying: "Attacks made against any political party are made against all political parties."

Emphasizing the significance of approaching the June 7 general elections in a peaceful environment, Davutoğlu also underlined that the ruling Justice and Development Party (AK Party) has always taken a solid stance against any sort of violence and reaffirmed its position. Regarding HDP officials who are blaming the government for the attacks, Kalın stressed that "the sincerity of those who hold the government responsible for the attacks will be questioned when the government has stated on numerous occasions that it is devoting all its efforts to establishing security measures for the elections." He also reiterated that security forces are conducting an investigation into the attacks.

Culture and Tourism Minister Ömer Çelik was the first government official to condemn the attacks via his personal Twitter account, followed by Deputy Prime Minister Yalçın Akdoğan, a Cabinet member who regularly holds talks with HDP on the Kurdish issue. Akdoğan said: "The provocations of those who are trying to disrupt the reconciliation process have failed and will never succeed." Parliament speaker Cemil Çiçek also condemned the bombings, saying that such attacks are carried out in order to raise political tensions and disrupt the peace in the country.

While AK Party deputies and top government officials have expressed their strong condemnation of the provocative attacks on the HDP offices, main opposition Republican People's Party's (CHP) Secretary-General Gürsel Tekin and Vice President Sezgin Tanrıkulu expressed their disappointment about the attacks and blamed the government and Davutoğlu.

With the HDP in a strategic role in the upcoming June 7 general elections since it must pass the 10 percent election threshold to win seats in Parliament, officials from the party said the aim of the attacks was to disrupt their election campaign. In addition, HDP Co-Chair Selahattin Demirtaş was scheduled to hold a rally in Mersin today and announced on Monday on his personal Twitter account that the rally will be held as scheduled.

Demirtaş has recently said that he will resign from his post if his party fails to pass the 10 percent election threshold in the upcoming general elections to enter Parliament. "If we fail to get enough public support, then this is a shortcoming [of our politics]. As co-chair of my party, if I fail to convince the public, if my party fails to pass the threshold because of me, then I will leave my post on the night of June 7," he said.

Recently conducted public surveys by companies such as GENAR and the Objective Research Center (ORC) have reported that the HDP is unlikely to pass the election threshold with support around 8 percent to 9 percent.

During his visit to the southeastern province of Mardin earlier this month, President Recep Tayyip Erdoğan said the government took the necessary steps in the reconciliation process it launched to end the conflict between the outlawed PKK and the state, but it along with the and HDP failed to abide by their promise. The government launched the reconciliation process to bring to an end the Kurdish question that claimed tens of thousands of lives for decades. The process was on the brink of reaching a conclusion, as the leader of the PKK announced in his Nevruz message in March that it was high time to lay down their weapons and continue their cause via democratic means. However, the process that seemed to have been finally cemented after numerous provocations was crippled again after the recent Ağrı attack by the terrorist group. "We did all we can but the separatist group and its political extension did not keep their promise," Erdoğan said, adding democracy and arms cannot exist together.
Last Update: May 19, 2015 8:26 pm
RELATED TOPICS