One person identified as suspect in HDP headquarters attack 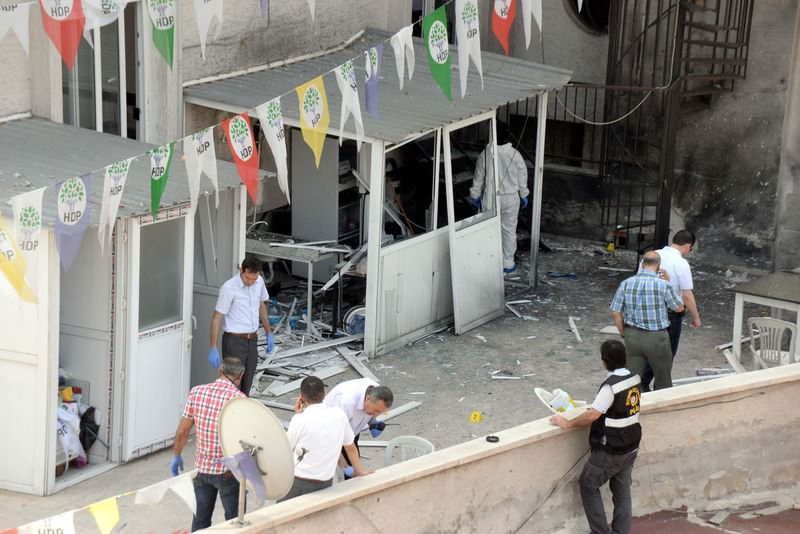 by Daily Sabah May 20, 2015 12:00 am
Prime Minister Ahmet Davutoğlu announced on Wednesday that the police identified the person who conducted the attack on the pro-Kurdish Peoples' Democratic Party (HDP) headquarters in Turkey's southern Mersin province.

"I have talked with interior minister, and he informed me that the attacker has been identified and will soon be caught." Davutoğlu said during his election rally in Yozgat.

Responding to an earlier statement by HDP that said "dark forces supported by the ruling power" were trying to obstruct their election campaign, Davutoğlu said "Those who blame us for the attack will owe us an apology after the suspect is caught and the incident will be brought to light."

It was revealed on Thursday that the identified suspect was in 2007 arrested for being a member of the Revolutionary People's Salvation Party/Front (DHKP-C) terror organization, which took a prosecutor hostage and then killed at the end of March.

The blast was heard in the HDP's Mersin headquarters, which was reportedly caused when a package containing flowers sent to the building was unpacked while in Adana, the explosion was caused by a cargo package.

The attacks caused damage to the buildings and injured three people.