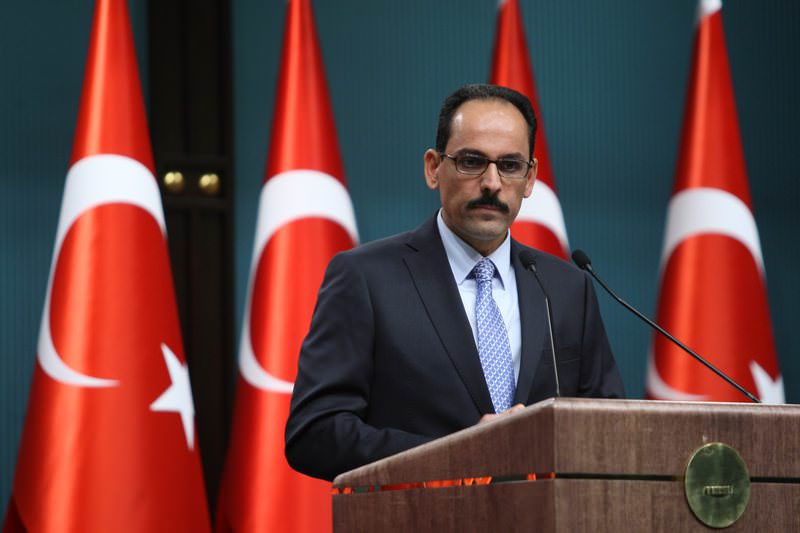 Speaking at a conference in Washington, Turkey’s presidential spokesman said as part of the train-and-equip program signed with the U.S., moderate Syrian opposition forces will soon get better results in their fight against ISIS and the Assad regime

While speaking at the Ankara-based Foundation for Political, Economic and Social Research's (SETA) annual conference in Washington, Kalın said that new momentum has been seen in Syria, and the train-and-equip program, which was signed between Turkey and the U.S. has commenced and will lead the internationally recognized Syrian opposition to gain power against the regime of Syrian President Bashar Assad.
He said the "failure" of the international community to train and equip the Free Syrian Army has strengthened the Assad regime and Islamic State of Iraq and Sham (ISIS), adding: "While the world media focused on the barbaric acts of beheadings, burnings and summary executions, the Assad regime allowed ISIS advances in northern Syrian territories to weaken anti-regime forces."

Kalın said the Assad regime uses ISIS to "divide and weaken the moderate Syrian opposition." He asked "why is ISIS not putting up a serious fight against the Assad regime? Why is it not advancing, for instance, toward Damascus, the regime's capital and stronghold?"

Turkey and the U.S. signed a deal on Feb. 19 to train and equip moderate Syrian opposition forces with the aim of achieving a political transformation in war-torn Syria on the basis of the Geneva Communique. In line with the agreement, moderate Syrian opposition forces will be trained in the central Anatolian province of Kırıkkale, National Defense Minister İsmet Yılmaz said in early March. However, due to the transportation of weaponry and the formation of fighting units taking time, the program will start three months after the agreement was signed.
Foreign Minister Mevlüt Çavuşoğlu has recently said that the program will begin on May 9. "There is no political or other issue. First, 300 people will be trained, followed by the next 300, and by the end of the year, the number of trained and equipped fighters will have reached 2,000," Çavuşoğlu said. He added that the U.S. and Turkey share the same view of a Syria without Assad.

In addition to Turkey, the program will be run in Qatar, Jordan and Saudi Arabia with the aim of training 5,000 people in one year, and 15,000 people over three years. Turkey has continuously said that a comprehensive strategy that includes safe and no-fly zones in Syria along with training opposition groups is necessary for a permanent solution to the war in the neighboring country.

In his nearly hour-long address, Kalın touched on a range of issues including Turkey's relations with Egypt, Palestine, Kurds and disarming the PKK.

He also addressed Turkey's desire for EU membership, saying: ''It is a strategic goal for Turkey." European countries seek good economic relations and security cooperation with Turkey, and "in turn, Turkey wants to maintain good political relations with European capitals and improve its share in European markets," he said. "As a matter of fact, about 45 percent of Turkey's foreign trade is with Europe and Turkey is a member of major European institutions," he added.
Last Update: May 21, 2015 9:05 pm
RELATED TOPICS