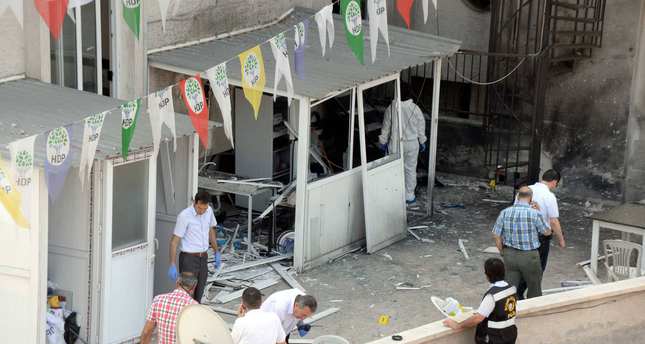 | DHA Photo
by Anadolu Agency May 21, 2015 12:00 am
The suspect in the twin bombing of offices of the Turkish opposition Peoples' Democratic Party (HDP) earlier this week has links to the radical far-left group Revolutionary People's Liberation Party-Front (DHKP-C), Prime Minister Ahmet Davutoğlu said on Thursday.

Although no-one has been arrested for the attacks on the pro-Kurdish party's offices in the southern cities of Mersin and Adana on May 18, Davutoğlu claimed a suspect had been identified as having links to the banned DHKP-C group.

"This assailant was arrested in recent years for being a member of the terrorist group DHKP-C," Davutoğlu told a Justice and Development Party (AKP) election rally in Sinop on the Black Sea coast.

The blasts, which occurred almost simultaneously on Monday morning, injured six people. The HDP, which is contesting a general election for the first time on June 7, was holding a rally in Mersin later that day, where Co-Chairman Selahattin Demirtaş gave a speech.

Davutoğlu lashed out at accusations that the government and the AKP sparked the bombings through incendiary speeches attacking the HDP.

"A member of a terrorist group staged such an attack and they put the blame on the AK Party," he said. "This is how they are unmasked one by one."

Shortly after Davutoğlu's speech, the Interior Ministry issued a statement saying police had identified a member of a banned "leftist organization" as being behind the HDP bombings. It said the suspect was twice arrested for terrorism offenses in 2007, in Ankara and Istanbul.
The ministry added that efforts were underway to catch the suspect.

The DHKP-C was responsible for the murder of a senior prosecutor in Istanbul on March 31.

Mehmet Selim Kiraz, 46, was taken hostage at Çaglayan court, the largest in Turkey, and shot by his captors after six-hours of negotiations. The two hostage-takers, who released photographs of Kiraz with a pistol to his head during the siege, were killed by security forces.

Kiraz had been investigating the death of Berkin Elvan, 15, who was mortally injured by a police tear gas canister during the 2013 Gezi Park protests.

The DHKP-C is considered a terrorist group by Turkey, the EU and the U.S.

It claimed responsibility for an attempted grenade attack in January on police guarding Istanbul's Dolmabahçe palace, as well as a suicide attack on a police station in Istanbul later that month but later withdrew that claim.