Southeastern Hakkari connected to rest of Turkey with new airport 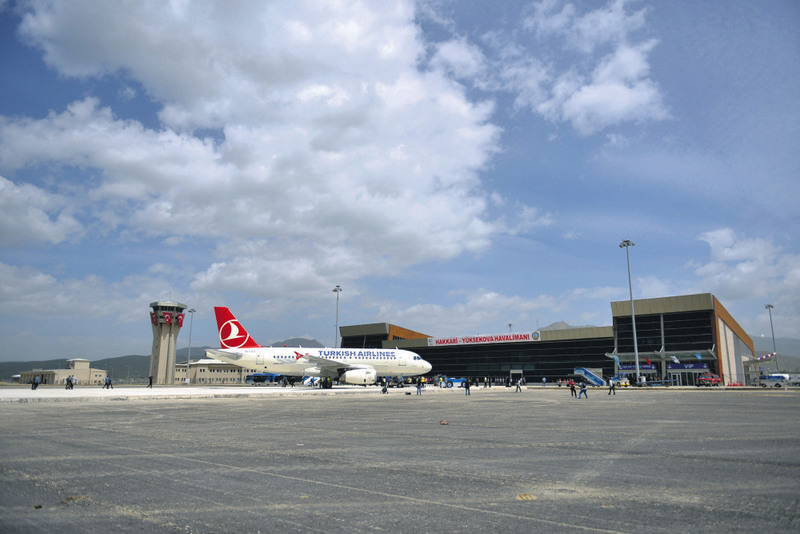 Tuesday's inauguration of the country's 55th airport by President Erdoğan and Prime Minister Davutoğlu in Kurdish-majority Yüksekova, Hakkari is seen as a victory over the terrorist organization PKK's repeated assaults and efforts to derail the reconciliation process

Turkey's 55th airport began service on Tuesday in the district of Yüksekova in the southeastern border province of Hakkari. In attendance at the inauguration of the airport, whose foundations were laid in 2010, was President Recep Tayyip Erdoğan and Prime Minister Ahmet Davutoğlu along with other dignitaries from the ruling party. The airport, which will ease transportation to the region and boast a 1-million-passenger per year capacity, is also expected to be a significant trade spot within the triangle of Iraq, Iran and Turkey. The Yüksekova inauguration ceremony was preceded by the opening of Ordu-Giresun Airport, the country's first airport on an artificial island, off the Black Sea coast on Friday. Speaking at the ceremony, Erdoğan said there has been dozens of attempts by terrorists to obstruct the completion of the airport. "The airport was to be completed two years ago, but there have been 99 attacks on the construction site. Machines were burned down and the contractors were threatened. But despite all this, we resumed the process with determination not to deprive the people of Hakkari from these opportunities," Erdoğan said, touting the efforts by the government to elevate the conditions of the people in eastern provinces.

The project has been subjected to intense provocation and sabotage by the outlawed PKK, which is widely influential in the region despite the ongoing reconciliation process the government is pursuing with the Peoples' Democratic Party (HDP) to end the conflict between the state and the PKK. However, the government has displayed determination to complete the construction of the airport in the district that once was a stage for fierce clashes between PKK militants and Turkish soldiers.

The ruling party launched the reconciliation process in 2013 to end the Kurdish question as part of its democratization initiatives. The efforts to ameliorate the conditions of eastern provinces, which are predominantly Kurdish, commenced during the tenure of the Justice and Development Party (AK Party). After decades of apathy, the concerns and needs of Kurdish communities residing in highly isolated areas are finally being addressed.

Yüksekova, which depends heavily on stock breeding and farming, failed to become industrialized for decades due to safety issues stemming from terrorist activities in the region.

The clashes between PKK and the state that lasted for nearly four decades claiming thousands of lives on both parts led to the evacuation of villages, which engendered an irregular rise in the population. The disordered settlement, insufficient infrastructure and problems with health and education have been taken up by the AK Party government while in power.

The thawing of the conditions along with the reconciliation process that all but ended the violence in the region led to an increase in job opportunities and, in parallel, the villagers who abandoned their places of settlement began returning. There have also been improvements in health over the last few years. Health services were carried out by only five health care centers until 2010.

However after the government put into force a new system, these centers transformed into family medicine units and 36 new centers have been established.

Davutoğlu said at the airport's inauguration ceremony that there was only one ambulance before they came to power, but currently there are 42 ambulances and one medical helicopter. President Erdoğan said the ruling party established hospitals both in Yüksekova and Hakkari.

Education has also been expanded during the tenure of AK Party governments. Development Minister Cevdet Yılmaz, speaking at the Hakkari provincial convention in February, announced that the ongoing investment allocated for Hakkari in the area of education was approximately TL 200 million ($75.8 million). During his speech he also brought up an AK Party project to open up a university in each province.

"We have established our university in Hakkari and are providing it with considerable investments," Yılmaz said.

As part of the Village Infrastructure Support Project (KÖYDEŞ), launched by the Interior Ministry in 2005, Hakkari has been provided with TL 146 million for the construction of village roads, the transfer of water and completion of infrastructure. Compared to the funds provided to the province in the past, it has increased 10 times compared to 2003 when only TL 19 million was provided for works in Hakkari. The AK Party government also established an agency that specifically hones in on achieving development in eastern Turkey.

Members of a terrorist organization widely active in the rural areas of the region had distributed intimidating notifications to employees at the construction site and threatened local suppliers selling the materials required for the airport's construction.

The terrorists, who claimed that the airport was being constructed for military purposes, tried to intimidate the project's construction workers using threats such as, "We are not responsible for the consequences." The terrorist group also attacked the construction site with a handmade bomb that was left at the site, although it was disposed of by security forces without being detonated. The terrorists also attacked trucks carrying materials to the site, sabotaged two construction vehicles and 11 trucks and kidnapped some of the drivers.