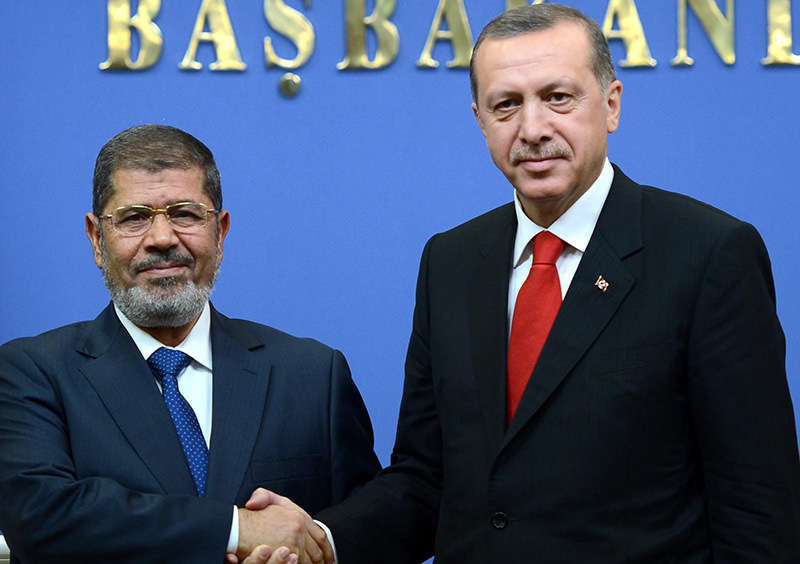 Turkey's then Prime Minister Tayyip Erdogan (R) and his guest, Egypt's President Mohamed Mursi greet the audience during the AKP congress in Ankara on September 30, 2012 (AA Photo)
by Ayşe Şahin May 27, 2015 12:00 am

The silence of the Western world concerning the military coup that toppled Egypt’s first elected president and Western leaders’ efforts to appease the junta showed it failed the democracy test, President Erdoğan said

President Recep Tayyip Erdoğan has criticized the Western world for not taking a concrete step against the death penalty handed down to Egypt's first elected president, Mohammed Morsi, and assessed the inaction of the community as a failure of democracy.

"Those [in the West] who believe in democracy should take a stance against what is taking place in Egypt above all," Erdoğan said late on Tuesday in a question and answer session on NTV news channel. He continued: "If they don't, I doubt their being democrats."

An Egyptian court sentenced Morsi to death on May 16 prompting an immediate response from his close ally, Erdoğan, who condemned the decision and branded the move as a roll-back to the "old Egypt" that "lacked democracy." Erdoğan spoke out against the ruling shortly after the announcement of the court's decision to sentence Morsi and more than 100 others from the Muslim Brotherhood to death.

While Turkey reacted against the ruling, the West has refrained from taking a stance on the matter. The U.S. and U.N. issued messages against the ruling that condemned Morsi to death in which they expressed concerns about the death sentences delivered to Morsi and other Muslim Brotherhood members. However, this was far from satisfactory for Erdoğan, who called for more concrete steps against the rulings instead of "expressing concerns."

"They approach the matter using abstract expressions. They make references without specifying a subject. [However] when it is [their own interests] at stake, they take the matter differently," Erdoğan said.

Morsi was ousted by a military coup led by then minister of defense and current President Abdel-Fattah el-Sissi following mass protests against Morsi's rule in 2013. Erdoğan has expressed support for Morsi and the Muslim Brotherhood since a brutal crackdown by the ousters, at the cost of souring relations with Egypt. The Turkish government has been firm in its stance against the ouster of a democratically elected president following the crackdown on Morsi and his followers. Ankara's relations with Egypt deteriorated immensely due to its firm stance on the issue.

"Hundreds of people were sentenced to death and there is utter silence. About 40,000 people are behind bars. The West has failed in this matter," Erdoğan said, adding that he will never "sit at the same table" with the ouster.
When asked whether Turkey's efforts to halt the decisions or seek a resolution will continue, Erdoğan said he has been calling for support to obstruct the decision to be executed and that the efforts will continue.

As part of Turkey's efforts to find a resolution to the issue, Foreign Minister Mevlüt Çavuşoğlu said late on Monday that some Gulf countries like Saudi Arabia and Kuwait could negotiate with Egyptian authorities in order to allow Morsi a life in exile rather than execution imposed by the junta-dominated Egyptian judiciary.

"It is not possible for us to make such a move taking into consideration the relations we have with Egypt. It would be no good to directly contact the authorities when our relations are at this point," Çavuşoğlu said.

"I don't think [Egypt] would welcome our contact. But countries such as Saudi Arabia and Kuwait could have a role in it. We have been telling them since the beginning that Morsi should go to a third country, which does not mean that we don't want him here. They [Egyptian authorities] would not be in favor of his presence in Turkey," Çavuşoğlu said, adding that what really mattered was his not being executed and that he leave the country.

"I think if the Gulf countries press this offer they could lead Egypt to take that decision," Çavuşoğlu said.

After deposing President Hosni Mubarak, Morsi and the Muslim Brotherhood were found guilty of their role in a mass jailbreak in 2011, which ultimately brought Morsi to power. The court sentenced them to death in a hearing on May 16 and referred its decision to the nation's top Muslim cleric for his non-binding opinion. The judge who handed down the decision has scheduled June 2 for the next hearing and the final decision will be delivered on that date and will be open to appeal. Before the sentencing Morsi and his co-defendants have been serving their sentences linked to the murder of demonstrators during clashes between Morsi's supporters and opponents outside eastern Cairo's Ittihadiya presidential palace in December 2012.

Erdoğan issued a message in three languages on his Twitter account regarding Morsi's death sentence a day after its announcement. The target in his message, which was posted in Turkish, English and Arabic, was once again international circles that he accused of not taking action against the decision.

"Every bullet fired on thousands of people in Egypt who pursue their political will is also directed at the legitimate politics around the world. I call out to the European Union and [world powers], what happened to the ban on the death penalty? Why don't you move [against it], Why are you quiet?" Erdoğan's Twitter message read.

Prime Minister Ahmet Davutoğlu also spoke against the Egyptian court's decision, drawing parallels to the 1960 military coup that resulted in the execution of then Prime Minister Adnan Menderes. Menderes was put on trial following the coup and was executed along with two ministers, Hasan Polatkan and Fatin Rüştü Zorlu.

"A disdainful, painful period that Turkey experienced 55 years ago is now being repeated in Egypt," Davutoğlu had said.

Mass sentences were delivered not only for Morsi and other members of the Muslim Brotherhood, but also pro-democracy activists during the 2011 uprising, which erupted out of a call for the resignation of Mubarak, who was implicated in corruption. Mubarak faced charges ranging from blighting the economy of the nation to ordering his forces to kill demonstrators. All were dismissed in November 2014. A retrial was ordered on corruption charges as a result of which he was sentenced to three years in prison and was forced to pay huge amounts in fines.

The courts, which were relatively more lenient on Mubarak and officials during his term, are delivering harsh punishments for Morsi and members of the Muslim Brotherhood, which many believe is a sign of the biased judicial system in the country.
Last Update: May 27, 2015 9:23 pm
RELATED TOPICS