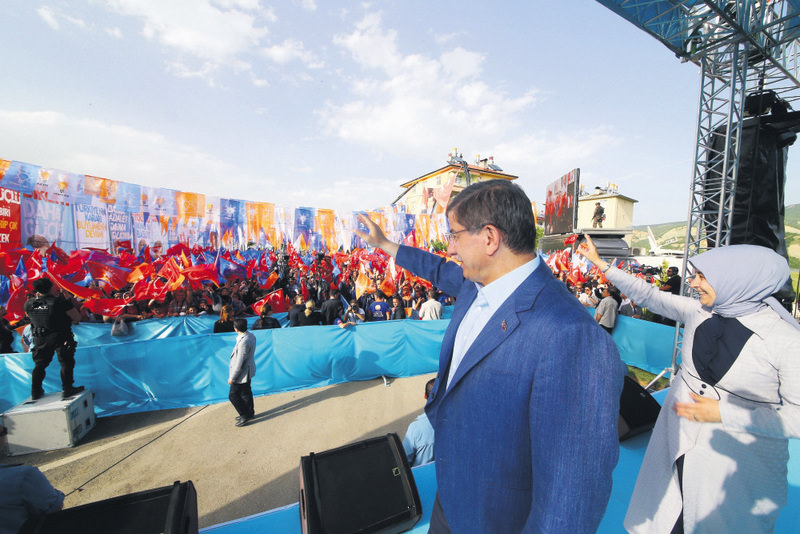 Prime Minister Davutou011flu addresses supporters at a rally in Tunceli province.
by Ayşe Şahin May 28, 2015 12:00 am

Prime Minister Ahmet Davutoğlu, as part of his plan to hold rallies in all of Turkey's 81 provinces, visited the eastern province of Tunceli, a predominantly Alevi region, yesterday where he delivered a message of peace and unity to supporters at a rally. Touting steps by the government to eliminate discrimination against Alevis, who have suffered from long-standing isolation at the hands of previous governments, Davutoğlu said the ruling party will never let the community be abused again. "Just like we have struggled against all kinds of abuse against our Kurdish citizens, we will never let our Alevi community be exploited," Davutoğlu was quoted as saying. Alluding to the Dersim Massacre in 1937, which resulted in the killing of over 10,000 people, Davutoğlu said the Justice and Development Party (AK Party) had reversed the state's decades-long silence on the matter.

He said the government faced the atrocity the community was subjected to when then Prime Minister Recep Tayyip Erdoğan apologized for the massacre on behalf of the state and called on the main opposition Republican People's Party (CHP) to do the same, a call that was left unanswered.

It is not the first time Davutoğlu has visited the province. In late November, he paid a visit to Tunceli where he said the government was well aware of the Alevi community's demands and pledged to do their best to meet them.

During his previous visit, Davutoğlu gave the Alevi community a piece of good news, announcing that in line with Alevi demands, the old barracks in Dersim would be turned into a museum called the Dersim Museum. Tunceli University will also be renamed Munzur University after the Alevi religious leader Munzur Baba.

Returning the former names of Alevi regions is symbolically significant to the Alevi community. The renaming issue has unpleasant connotations for Alevis that evoke the pressure they have been put under due to their ethnicity, language and beliefs.

The Alevi issue has been one of the most controversial issues in Turkish history. Having faced severe oppression and undergoing many atrocities, the community is now seeking ways to heal its wounds. Turning its eyes to the current ruling party officials who keep reiterating that they have a genuine will to do what is necessary to reconcile with Alevis, they are now close to reaching a resolution as the government speeds up the work.

The government, however, realizes that the length of time it took the state to acknowledge the cruelty the Alevis were exposed to during the Dersim Massacre, perpetrated against people who rebelled against Turkey's 1934 Resettlement Law, it will not be possible to fully satisfy the Alevi community.

The first step to accepting the incident as a massacre came from Erdoğan in November 2011. He apologized for what happened in 1934 on behalf of the Turkish state and called on the main opposition CHP to do its share and apologize on behalf of previous CHP governments that were responsible for the massacre.

Two years later the government came up with a democratization package for Alevis proposing changing the name of a university in the central Anatolian province of Nevşehir. The name of the university, which was Nevşehir University, was changed to Hacı Bektaş-ı Veli University. Hacı Bektaş-ı Veli is a very important figure for Alevis. He was a 13th century mystic whose rational, progressive and humanistic thoughts are influential among Alevis. The reform, however, came as a disappointment to Alevis, who wanted more from the government than renaming, mainly focusing on the acceptance of their cemevis as places of worship. The lack of satisfaction from Alevis prompted the government to come up with more initiatives. Officials recently expanded on the work to meet the Alevi grievances.

The government has made an important decision regarding the status of Alevi foundations. A ruling that accepts the Haci Bektaş Veli Anatolian Cultural Foundation – known to be one of the largest Alevi organizations – as an organization working for the public interest was adopted, signaling an unprecedented move that is expected to have a positive impact on the official status of Alevi organizations.
Last Update: May 29, 2015 3:20 am
RELATED TOPICS