Aid sent upon Ankara's order to Turkmens for defense against ISIS, Syrian regime 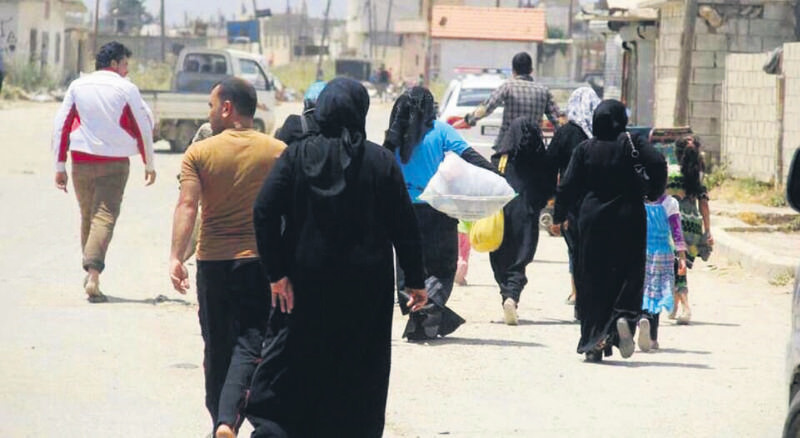 Prime Minister Davutoğlu criticized the raiding of Turkey's Syria-bound intelligence trucks and underlined that the contents of the trucks is irrelevant, while adding that Turkey will continue to provide assistance to the destitute Turkmen community in Syria

Prime Minister Ahmet Davutoğlu said Turkey provided assistance to Turkmens in Syria who have been neglected by the international community during clashes and that the contents of the Syria-bound trucks belonging to the National Intelligence Organization (MİT) which were raided in an unauthorized operation in 2014 is "nobody's business." Speaking on a TV program Saturday, Davutoğlu said the crisis in Syria was critical as nobody was responding to the calls of the destitute Bayır-Bucak Turkmen population in the country. "Yes, there were severe clashes in Syria and we provided assistance to the Turkmens," Davutoğlu said. "Turkey has never supported any terrorist organization anywhere in the world," he said in response to claims that the Syria-bound trucks contained ammunition to support terrorist groups in Syria. He said Turkmens in Syria had requested assistance from Turkey saying: " 'We will be massacred if you do not lend a helping hand.' " Davutoğlu said intelligence units received instructions from the government to make sure that the Turkmens were not oppressed by various factions in Syria, including the Islamic State of Iraq and al-Sham (ISIS) and President Bashar Assad's regime.

"Frankly speaking, we are administering a state, not playing games," Davutoğlu said, criticizing the interception of MİT trucks, which he claimed was an attempt by the Gülen Movement to debilitate the government. He said the raids were unlawful as they were conducted to undermine orders given by the government.

He said those who initiated the raids carried them out against the will of the people as they targeted the government that was popularly elected by the will of the nation.

The Turkmen community in Syria has over 3 million people dispersed throughout the country, unlike the Kurdish and Nusayri communities, which are concentrated in specific regions. They have expressed gratitude for continued support from Ankara and have said that they expect more aid "to defend themselves" against ISIS and the Syrian regime.

Turkey has consistently underlined it will not abandon Syria's Turkmens, who have suffered when their lands were invaded in 1918 and under the cruel leadership of the Assad regime. The community also lost many lives when the country fell into civil war, which has entered its fifth year. While the U.S. – through the CIA and other channels – France and many other countries openly extended weapons assistance to the Syrian opposition, Turkey's opposition made various speculations of Ankara's active support of Syria's Turkmen population.

Since the Syrian civil war erupted in 2012, Turkmens have continuously received different kinds of support from Turkey, including humanitarian, diplomatic and logistical assistance, while Turkmen leaders underlined that greater military and financial aid is needed to make a change in the field against ISIS and regime forces.

Ankara's diplomatic efforts have enabled the representation of the Turkmen community, which was not invited to the talks in Geneva last week.

Both Davutoğlu and President Recep Tayyip Erdoğan have consistently reaffirmed that Turkey will not stand by and watch the suffering of the Turkmens, but will continuously support them.

In January 2014, security forces intercepted MİT trucks upon an order by a prosecutor allegedly affiliated with the Gülen Movement over claims that the trucks were carrying weapons to Syria.

The supplies in the trucks were seized and MİT staffers were handcuffed before they were detained, which prompted the government to reform its intelligence laws in an effort to avoid such situations in the future. The governor of the province was informed about the incident in its latest phase and many believe the operation was aimed at creating a political crisis via joint efforts by the Gülen Movement and anti-government media outlets that made the incident public, despite its highly confidential status.

The unauthorized operation, which has been said to amount to a violation of national security, led to an investigation by the Istanbul Chief Public Prosecutor's Office, which accused the suspects of exploiting their positions and being members of a criminal organization. The prosecutors who ordered the interception of the trucks were then accused of attempting to spark a crisis in the country and are currently under arrest for their alleged involvement in the operation.
Last Update: May 31, 2015 9:18 pm
RELATED TOPICS