Turkey surpasses the EU countries in number of Syrian refugees 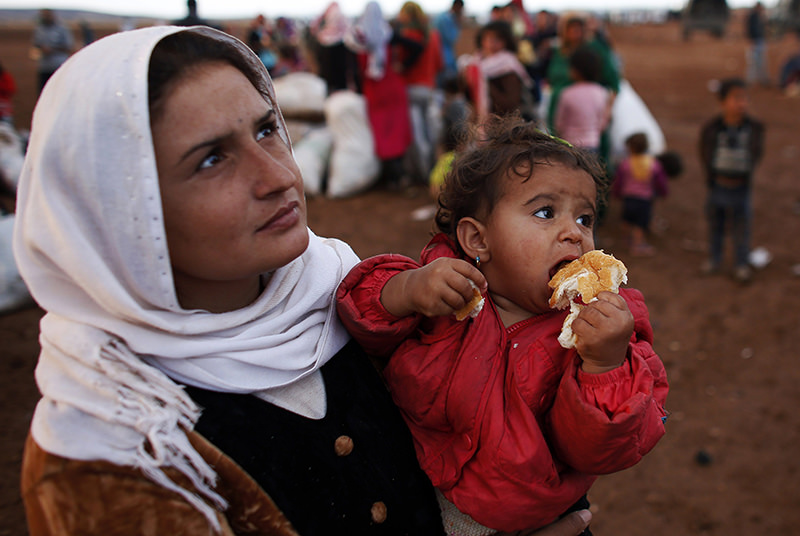 A Syrian Kurdish refugee woman with her daughter waits for transportation after crossing into Turkey from the Syrian border town Kobani, near the southeastern Turkish town of Suruu00e7 (Reuters Photo)
by Merve Aydoğan Jun 02, 2015 12:00 am
As the situation of Syrians escaping Syrian President Bashar Assad's regime as well as the Islamic State of Iraq and al-Sham (ISIS) continues, Turkey has opened its doors to over 2 million Syrian refugees. In this regard the 28 member EU, which is five times larger than Turkey, is being criticized for its policies on refugees. Syrians are not only seeking asylum throughout Turkey and the Middle East, but also in EU countries.

Following the incident in the Mediterranean Sea where more than 1,500 migrants lost their lives within one week, negligence of the European countries as well as their policies on refugees began to be questioned again. Although EU countries have accepted 120,000 Syrian refugees in total, the number of Syrians escaping the war is nearly 4 million. The number of refugees EU countries have accepted is only equivalent to 4 percent of the total number. In contrast to the EU, Turkey has employed an open-door policy for the Syrian refugees and has spent over $6 million of humanitarian aid for the refugees. In addition, the Prime Ministry Disaster and Emergency Management Authority (AFAD) has been hosting over 250,000 Syrians in 25 refugee camps.

Turkey has not only been taking in Syrians, but is also providing them with basic needs such as education, social and cultural assistance. While numerous international organizations have praised Turkey's devoted efforts for Syrian refugees in need of immediate help, the U.N. and countries worldwide are showing Turkey as a model for providing humanitarian aid. In case of EU countries, the international community continues its criticisms and that the EU has failed in its Syria policies.