As battle rages in Aleppo, Turkey readies for new wave of refugees 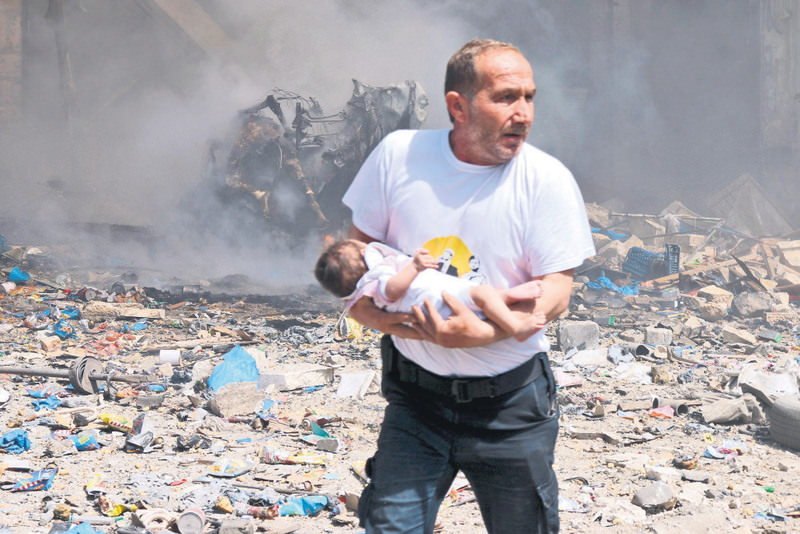 A man holds a baby that survived what activists said was a site hit by a barrel bomb dropped by the Assad regime in the old city of Aleppo on Wednesday.
by Merve Aydoğan Jun 03, 2015 12:00 am

Turkish officials said a new influx of refugees from war-torn Syria is not expected but the border provinces are prepared to handle such a situation. At least 30 people were killed in two regime barrel bomb attacks in Aleppo

Turkish officials have announced that they are ready for any possible refugee flow from Aleppo and are capable of taking care of them. With increased ISIS and Assad regime violence in and around Aleppo, there is a serious fear that hundreds of thousands may flee to Turkey. However, the Foreign Ministry said there was currently no extraordinary activity on the border.

The situation of the Syrian Turkmen community has been placed on Turkey's agenda following the discussions regarding the Syria-bound trucks belonging to the National Intelligence Organization (MİT). According to recent reports by local media, Turkey is accepting a new wave of refugees from Syria, this time Turkmens, fleeing the Islamic State of Iraq and al-Sham (ISIS). In regard to the claims, sources from the Foreign Ministry spoke to Daily Sabah and denied the alleged refugee flow and underlined that there is no significant increased activity along the Turkish-Syrian border. In addition to the Foreign Ministry's disavowal, Şanlıurfa Governor İzzettin Küçük announced to local media that they do not expect a new flow of refugees, but stressed that they are prepared for all possibilities.

Syria's Turkmen Assembly spokesman, Tarık Sulo Cevizci has recently said that the assistance provided by the Turkish government prevented a possible massacre of Syrian Turkmens by ISIS or the Syrian regime. ISIS has been reportedly increasing its terror activities throughout Aleppo and the surrounding areas within last week, seizing two Turkmen villages within 40 meters from Aleppo. Local media outlets have reported that civilians who had escaped the airstrikes by the U.S.-led anti-ISIS coalition have put up tents along the Turkish-Syrian border waiting for aid from Turkey. However, Turkish officials have emphasized that such reports do not reflect the facts and that the reports are speculative.

Though the sources from the Foreign Ministry deny the claims and stress that Turkey will maintain its open-door policy, the reports indicate that due to the increased attacks around the villages near Aleppo by ISIS, nearly 1,500 Turkmens are expected to arrive in Turkey. The reports say that the number of refugees seeking asylum in Turkey will increase as ISIS maintains its terror activities in other cities. The reports continue to say that while there is severe conflict within the region, the Şanlıurfa governorate is refraining from providing aid to civilians seeking help. Küçük highlighted that the claims do not reflect any truth and that "though there is some conflict beyond the border, a group of 50 to 100 civilians come to the border and leave after we provide them with basic needs." He further underlined that although the governorate does not expect any new wave of refugees, they are ready for any possibility.

Commenting on the claims exclusively to Daily Sabah, officials from the Disaster and Emergency Management Presidency of Turkey (AFAD) also emphasized that the Turkish government is completely prepared to meet any challenges ahead. Officials from AFAD further said that humanitarian relief efforts have been ongoing for several years and will continue for those in need. In addition, displaying gratitude for the help extended by Ankara to the Syrian Turkmens who contend with the threats posed by the Assad regime and ISIS, Cevizci said: "We were on the brink of a massacre before Turkey intervened. The stopping of the trucks led ISIS to take control of roughly 200 Turkmen villages. It is unethical to exploit the assistance provided to us for political purposes. While we are being subjected to a massacre, the aid is being portrayed as something wrong and only pleases our enemies."
Last Update: Jun 03, 2015 10:04 pm
RELATED TOPICS