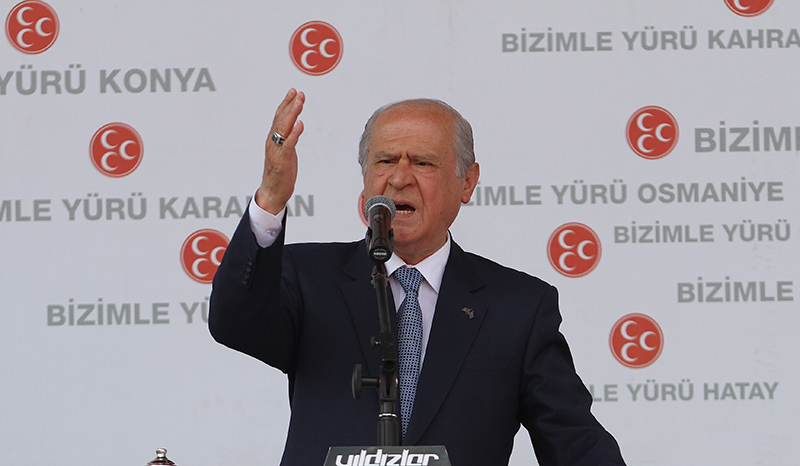 Unsettled about funds sent by the government to the impoverished around the world such as in Somalia, Libya, Palestine and Syria, MHP chairman Bahçeli criticized Ankara for its policy saying the supplies should be used for Turkish citizens instead

Nationalist Movement Party (MHP) Chairman Devlet Bahçeli castigated Turkey's policy of extending help to the needy across its borders in hard-hitting words during a rally in the eastern province of Elazığ on Tuesday. He accused the government of turning a blind eye to the country's domestic problems while they provide assistance to indigents abroad. Numbering the countries Turkey has so far aided, Bahçeli began his critical speech against Ankara by citing supplies sent to Somalia by the government.

"Those who send piles of money to Somalia are stingy towards the retired," Bahçeli said. "Those who funnel a fortune to those in Myanmar are cruel to the farmers [in Turkey]; those who spent a billion dollars on the Syrian refugees turn a cold shoulder to our aggrieved and those who gave what Elazığ deserves to Palestine, or Libya are ruthless towards our people who get by on the minimum wage."

Although it is common among all opposition parties to use criticism against the ruling party to overpower it in the upcoming elections, Bahçeli's harsh rhetoric and criticism over an issue that Turkey boasts about will likely draw a public reaction, just like when the leader of the Republican People's Party (CHP) Kemal Kılıçdaroğlu did when he vowed to send back the Syrian refugees that Turkey currently hosts if he comes to power.

Kılıçdaroğlu, in an apparent bid to appeal to his base, which is considerably unsettled by Ankara's open-door policy and the nearly 2 million refugees it offers shelter to, vowed during his campaigning to send them back to their homeland, where there are continual security issues caused by the Assad regime and Islamic State of Iraq and al-Sham (ISIS).

Kılıçdaroğlu came under fire from many circles for his election promise that looked like insensitivity toward the suffering of the destitute across the world.

He made the promise in the southern province of Mersin, which has seen one of the highest influxes of Syrians across the country due to its proximity to Syria, in a purported attempt to garner more votes from citizens.

"[The CHP] will send our Syrian brothers back. We will say to them, 'Sorry, but go back to your hometown,'" Kılıçdaroğlu had said.

The Justice and Development Party (AK Party) adopted a policy of helping needy Muslims, regardless of their location. It provides a substantial amount of finance to Gaza to help them rebuild the ravaged infrastructure, following Israel's recent military onslaught on the Gaza Strip, as well as to those in Libya, which has been in turmoil for years.

The ruling party has also extended a helping hand to the Rohingya Muslims who are trying to escape extremist Buddhists in boats with many dying of hunger or drowning in sinking ships before they make it to a safe shore.

The Somalian people who are at the edge of death due to drought and famine have expressed gratitude to the government for the supplies they have received from them.

Among all those countries, neighboring Syria has seen the most assistance from the government. Turkey has been hosting approximately two million refugees in its territory since the outbreak of the civil war in Syria.

The government became the third largest international donor after the U.S. and the U.K. in 2013, accounting for 7.3 percent of the total level of humanitarian assistance, according to the Global Humanitarian Assistance (GHA) Report 2014.

Turkey's humanitarian spending increased by $591 million to $1.6 billion in 2013. A significant portion of this increase stems from Turkey's assistance to Syrian refugees inside the country, amounting to over 2 million people.

Among all these, some circles in Turkey feel uneasy about the flow of funds to foreign countries. As for the Syrian refugees in the country, even though some Turkish people have opened their doors and even shared their bread with Syrian refugees as a result of traditional hospitality, some have complained about the high number of refugees, claiming those who fled their country have made things difficult for locals.