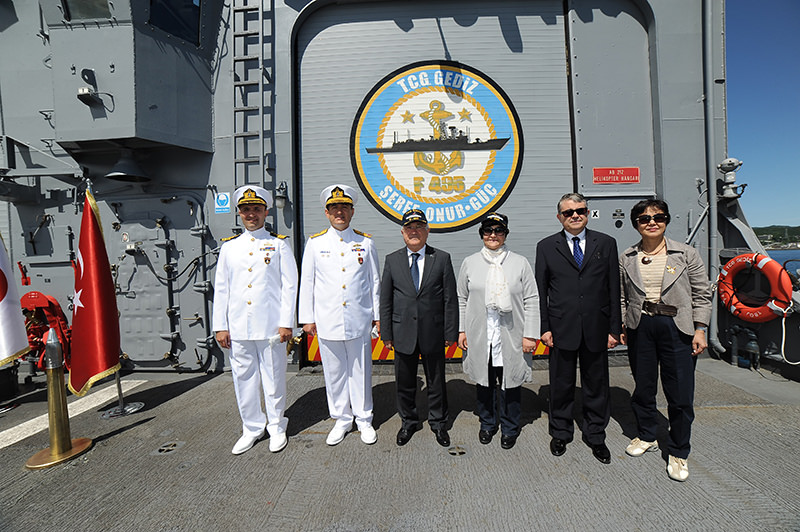 | AA Photo
by Anadolu Agency Jun 04, 2015 12:00 am
When almost 600 Ottoman sailors lost their lives in far-off Japan in 1890, few at the time would have thought that the tragedy would usher in more than a century of friendship.

But the sinking of the Ertuğrul frigate on its way back from a goodwill voyage to Japan did just that, establishing a bond between the Japanese and Turkish peoples that has endured even after the fall of the Ottoman Empire.

Marking the 125th anniversary of the tragedy, Turkish Parliament Speaker Cemil Çiçek joined Japanese Princess Akiko of Mikasa and other officials at a ceremony Wednesday in the coastal Japanese town of Kushimoto.

"I would like to express my deepest gratitude to the people of Kushimoto who have acted like a caretaker of the cemetery where our martyrs were laid to rest [125 years ago]," Çiçek said at the event at the Kushimoto Cultural Center.

"We will not forget the benevolence and hospitality of our Japanese friends towards Turkish sailors," he said.

More than 580 sailors lost their lives on September 16, 1890 when Ertuğrul was caught in a typhoon off the coast of Wakayama prefecture, before drifting into a reef and sinking off an island close to Kushimoto en route to Istanbul.

The people of Kushimoto had helped the stranded sailors, and the entire saga became a milestone in historic friendly relations between Turkey and Japan.

Princess Akiko said these ties were further strengthened in the Iran-Iraq war, during which Turkey evacuated Japanese nationals from Tehran in 1985 before helping its own citizens.

"I feel that my father, Prince Tomohito, who endeavored to further strengthen Turkish-Japanese relations, entrusted me with the duty of maintaining this friendship," she said, before laying flowers at the memorial monument alongside Çiçek, a host of Turkish and Japanese officials and foreign mission representatives.

Çiçek and Princess Akiko later attended the opening ceremony of a model boat built in memory of the Ottoman frigate.

The original plan was to hold the commemoration ceremony aboard a Turkish frigate, TCG Gediz, which embarked April 1 from the southwestern Turkish town of Marmaris on a journey to Kushimoto.

Launched to simulate the voyage Ertuğrul went on 125 years ago, the modern vessel finished its two-month historic journey Tuesday. However, Wednesday's event had to be moved to the Kushimoto Cultural Center amid adverse weather conditions.

Gediz is not the first Turkish vessel to simulate Ertuğrul's goodwill voyage. The Turgutreis frigate had traveled to Japan for the first time in 1990, and again in 2000. Another vessel named Gemlik had sailed for a third journey in 2011.