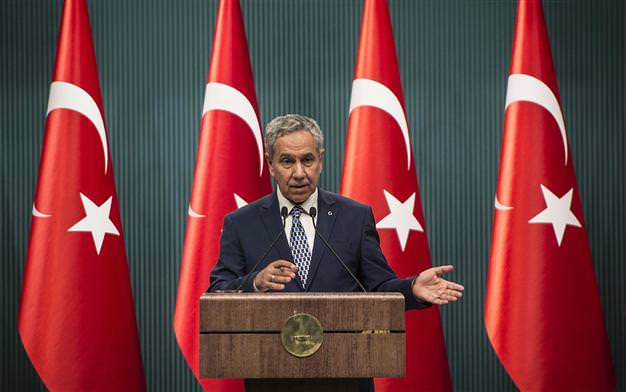 "Just as we thanked our people for bringing us to power with [almost] 50% [of the votes in 2011 election], we should also respect their decision in this election, although it may be an upsetting outcome," Arinc told reporters Tuesday after attending an art exhibition in the Turkish capital Ankara.

The Justice and Development (AK) Party came in first in the fourth consecutive general elections Sunday to secure the largest number of votes - 41 percent - and to claim 258 seats in the Grand National Assembly of Turkey, 18 short of a simple majority.

"We need to examine the factors which led to this outcome, and act accordingly. Because we are destined to be in power. We must be in power," Arinc said, adding that the AK Party had goals for Turkey not only for 2023 but for 2053 and 2071 as well.

"It is our duty to fulfill these [goals]. Therefore, the AK Party must get stronger than before in the first upcoming election," he said, stressing that he was not referring to an early election.

President Recep Tayyip Erdogan can call for a fresh election should parliament not support a possible coalition government.

Erdogan accepted Tuesday the cabinet's resignation submitted by Prime Minister Ahmet Davutoglu, and the cabinet was asked to continue its duties until the formation of a new government, presidential sources said.

Davutoglu is currently holding a meeting at the AK Party headquarters with senior leaders, following a meeting with Erdogan.

The Republican People's Party (CHP) came in second in Sunday's election, claiming 132 seats with 24.96 percent while the Nationalist Movement Party (MHP) claimed 80 seats in the Grand National Assembly of Turkey by receiving 16.29 percent of the vote.

The pro-Kurdish Peoples' Democratic Party (HDP) passed the 10 percent threshold with 13.12 percent of the vote to take 80 seats, marking the first time it will enter the parliament as a party.

The voter turnout in Sunday's election was 86.63 percent. Although the initial count has been completed, the figures need to be verified by the Supreme Election Council, which is a process due by June 19.

Once the final results are announced, the deputies of the 25th Grand National Assembly of Turkey must be sworn in within five days.