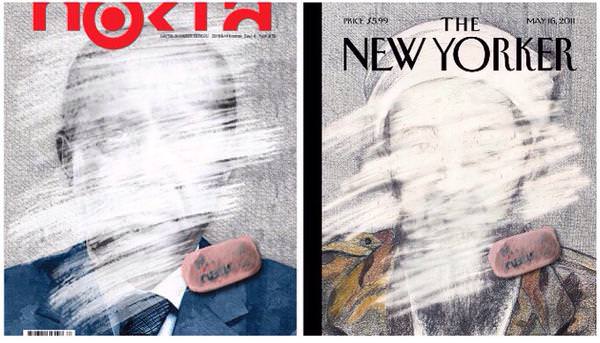 by Daily Sabah Jun 10, 2015 12:00 am
Nokta, which is a magazine allegedly affiliated with the Gülen Movement has published a provoking photo in their June 7, 2015 issue cover, which shows Turkey's President Recep Tayyip Erdoğan's portrait being erased, also plagiarizing the cover's design from the New Yorker magazine's May 16 2011 issue, which showed the portrait of Al-Qaeda's late terrorist head Osama bin Laden being erased by an eraser.

The magazine's May 18, 2015 cover also showed a controversial caricature of President Erdoğan wearing a soldier helmet and a hand grenade with its pin pulled in president's hand.

Nokta (dot in Turkish) which was re-launched in May 2015 was founded in 1983 but the owner had decided to close the weekly magazine down in 2007.