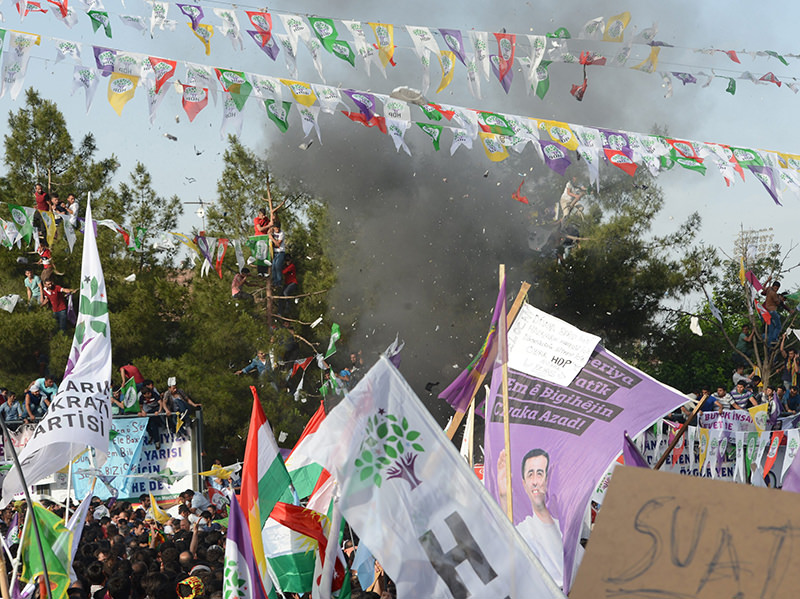 One suspect detained over the pro-Kurdish Peoples' Democratic Party (HDP) rally attack in the southeastern Turkish province of Diyarbakır was arrested early Wednesday.

Three people were killed and 100 injured by the fatal attack carried out during the party's election rally on June 5, only two days before the general elections.

Diyarbakır chief public prosecutor's office is carrying out the investigation.

"O.G. [the suspect] was placed under arrest for murder and for being a member of a terror organization by Diyarbakır's vacation court," Diyarbakır Chief Public Prosecutor Ramazan Solmaz said.

The suspect was detained in the southern province of Gaziantep and taken to Diyarbakır.

The suspect reportedly has links with the outlawed Revolutionary People's Liberation Party-Front (DHKP-C). The links between the bombings at the HDP's Mersin and Adana provincial headquarters with the attack in Diyarbakır are also being investigated.
The run-up to Turkey's general election was marred by violence, with bombings, shootings, knife attacks and clashes between rival supporters and police hitting the headlines.

The attack in Diyarbakır came two days before Turks were to go the polls in a general election where the HDP entered Parliament for the first time.

Following the attack, Prime Minister Ahmet Davutoğlu said Turkish security forces were working to find the perpetrators and that the attack was against Turkey as well as against the ruling Justice and Development Party (AK Party). "This is a dirty hand. The perpetrators did not target one party, but all [parties], the AK Party too." Thanking people in Diyarbakır for their "common sense" after the deadly attack, Davutoğlu urged people to go to the polls without any hesitation. The turnout in the elections was 84 percent.