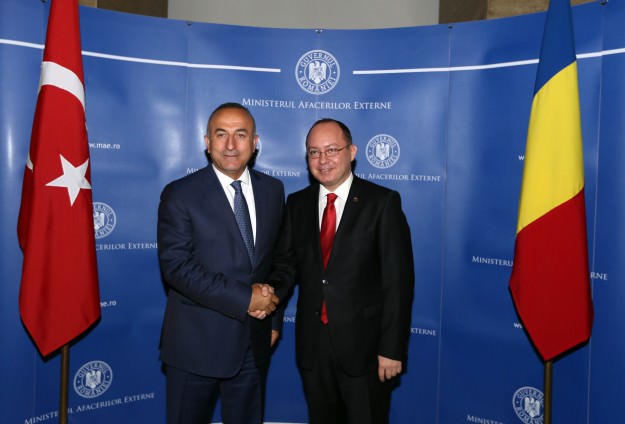 During an official visit to Romania, Turkish FM Cavusoglu discussed relations, trade and EU membership with his counterpart

Bilateral relations, trade volume and EU membership topped a meeting on Wednesday between Romania and Turkey's foreign ministers in Bucharest.

During a joint press conference with his Turkish counterpart, Romania's Bogdan Aurescu said: "We will continue to support Turkey's EU accession bid, and the relative reforms it is making to join."

Turkey's Mevlut Cavusoglu said their trade volume has increased to $6 billion in the last 13 years, adding "This shows us that there is a potential and Turkey and Romania can reach $10 billion soon."

Cavusoglu also said there are 7,000 Turkish companies operating in Romania and they have $6 billion of investment there.

Food production, agriculture, construction, media, education, Internet and health industries are among the wide range of sectors in which Turkish businesses are investing, according to the Turkish foreign ministry website.

Aurescu said the Turkish community contributes to the improvement of Romania.

The Turkish minister said there are about 17,000 Turks living in Romania and thanked his counterpart for their respect for Turks and Muslims.

"Romania's attitude should be taken as an example at a time when growing racism, xenophobia and intolerance in Europe has reached a worrying level," said Cavusoglu.

Negotiations for Turkey's accession to the EU began in 2005. Turkey must comply with 35 chapters setting out reforms needed to become a member. So far, 14 chapters have been opened, while 17 remain blocked and another four have yet to be discussed.
RELATED TOPICS