There are no 'red lines' in politics, says Deputy PM Arınç: Turkey 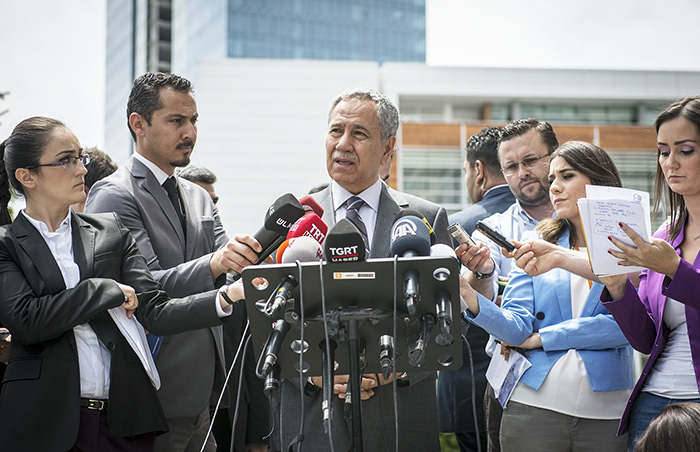 |AA Photo
by Anadolu Agency Jun 12, 2015 12:00 am
A senior member of Turkey's ruling Justice and Development (AK) Party has said opposition parties' "closing the door" on a potential coalition government is a mistake, during a press conference on Friday in Istanbul.

Deputy Prime Minister Bülent Arınç - a fouding member of the AK Party - rejected the so-called 'red lines' drawn by political parties ahead of forming a new Turkish government in the aftermath of the country's June 7 general election.

"Every party leader should establish very sincere and affirmative relations with other party leaders and work with them on a beneficial government model for the country," Arınç told reporters.

Sunday's election saw the Justice and Development (AK) Party lose its governing majority which it had held for over a decade.

"It is urgent to look for ways to form a strong government by considering the economy, foreign policy and all the subjects about Turkey," Arınç said, adding: "Efforts should be exerted on this."

His remarks came after some opposition leaders rejected forming a coalition with certain rivals.

On Tuesday, the Republican People's Party (CHP) said that it was discussing a coalition option without involving the AK Party.

"We can form a government with the other two parties easily," said Sezgin Tanrıkulu, CHP deputy head, speaking in Ankara.

Tanrıkulu was referring to the Nationalist Movement Party (MHP) which has also ruled out the possibility of forming a coalition with pro-Kurdish Peoples' Democratic Party (HDP).

"Let it be known that the MHP will not get in the same bag with snakes," said MHP deputy Semih Yalçın in a statement released on Thursday.

"They [the HDP] have our soldiers', our policemen's, our civilians' and mostly Kurdish people's blood on their hands."

The CHP won 132 seats with 24.96 percent, while the MHP claimed 80 seats with 16.29 percent votes. The HDP passed the 10 percent threshold with 13.12 percent votes to take 80 seats -- marking the first time it will enter the parliament as a party.

However, Arınç rejected such 'red lines', saying: "An understanding which closes the door to some parties is not a correct understanding," he said.

Once the final results are announced, the deputies of the 25th Grand National Assembly will be sworn in within five days. The constitutional deadline to form a new government will expire around August 18.
Last Update: Jun 12, 2015 3:03 pm
RELATED TOPICS