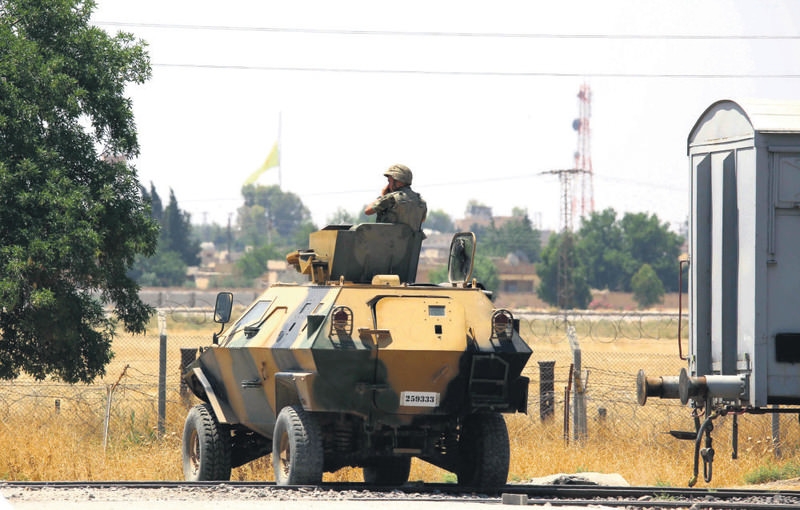 A Turkish soldier on an armoured personnel carrier watches as in the background a flag of the YPG is raised over the city of Tal Abyad on Tuesday.
by Fatih Şemsettin Işık Jun 19, 2015 12:00 am

Holding an emergency meeting late Thursday, Turkey sounded the alarm over the PKK-affiliated PYD's activities in northern Syria. The militant group is accused of cleansing northern regions of the Arab and Turkmen population to create a Kurdish-only zone

A high-level security meeting to hold talks on the latest developments in Syria and the rising mobility on the Turkish-Syrian border convened under the chairmanship of President Recep Tayyip Erdoğan at the Presidential Palace in Ankara on Thursday.

The impact on Turkey's national security from the reported demographic change that emerged in northern Syria following the Democratic Union Party's (PYD) People's Protection Units (YPG) driving the Islamic State of Iraq and al-Sham (ISIS) from Tal Abyad, forcing the Turkmen and Arab population to migrate, was at the center of the agenda. Measures that will be taken in the event that the situation deteriorates were also discussed. Furthermore, the situation of refugees in Turkey alongside a likely future influx of refugees from Syria was talked about.

Since clashes between the YPG and ISIS started, thousands of Syrian refugees have streamed into Turkey's Şanlıurfa province through the Akçakale border crossing on the Syrian-Turkish border.

The operation against ISIS in Tal Abyad has raised some concerns for Ankara. While it purportedly aims to push ISIS militants out of the town, it has also forced ethnic Turkmens and Arabs out, leading them to evacuate the town.

Ankara, which considers YPG fighters to be terrorists, is worried that the vacated town will be filled with YPG forces and their presence close to the Turkish border could put its security under threat.The operation against ISIS, which holds large areas of Syria and Iraq, has led Turkmens and Arabs to abandon their villages. Hundreds of Syrians fled their homes due to intense clashes and headed either south to Raqqah or north to Turkey. They thronged the border, which is directly opposite the town of Tal Abyad, and waited to be accepted by Turkey, depending on its open-door policy. Turkey accepted some 23,000 refugees.
Last Update: Jun 19, 2015 10:33 pm
RELATED TOPICS