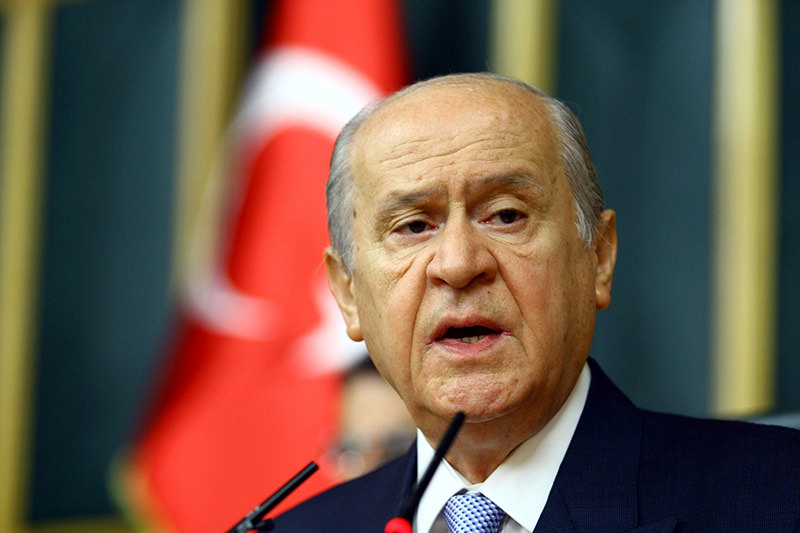 After rejecting the CHP offer of the prime ministry in a coalition government, the nationalist MHP will either join with the AK Party or pave the way for snap elections, which post-election surveys indicate AK Party gains

Nationalist Movement Party (MHP) Chairman Devlet Bahçeli refused the Republican People's Party (CHP) Chairman Kemal Kılıçdaroğlu's offer to be prime minister in a coalition government that would be formed with the help of the pro-Kurdish Peoples' Democratic Party (HDP).

"This is not a child's game, we are not running after small ambitions," Bahçeli said, claiming that there were many incidents between the two parties in the past that he described as "disgraceful," which render the coalition not possible. The two parties are known to have major ideological differences. Bahçeli called Kılıçdaroğlu's offer frivolous and likened it to "extending a candy apple."

Meanwhile, Kılıçdaroğlu replied back on Sunday with a written statement, saying that he meant a responsibility given by people when he said a "60 percent bloc," rather than a political partnership.

Our priority is principles and realizing our commitments to the people, and we have proved that we are ready to renounce posts for it, Kılıçdaroğlu said. "It seems that as other parties make calculations for the next election, they cannot even imagine a choice without the AK Party."

The CHP has continuously said it prefers a coalition government that excludes the Justice and Development (AK Party), but to achieve this it needs to convince the MHP, which has consistently said that it would not be part of a coalition with or supported by the HDP. Kılıçdaroğlu said on Sunday that all three opposition parties' stance on the AK Party are the same, thus their opposition should bring them together to form a government. Some analysts say the AK Party will now either negotiate with the MHP or Turkey will face an early election in October.

Kılıçdaroğlu claimed that there were commonalities between the election pledges of the CHP, MHP and HDP, and added that they could take crucial steps toward resolving the problems in Turkey through these common principles. He also said his party has no hesitation regarding early elections and that the June 7 general elections gave political party leaders the authority to form a government. "We have to take this into consideration and find a way to reconcile," Kılıçdaroğlu added. MHP Group Deputy Chairman Yusuf Halaçoğlu on Friday responded to Kılıçdaroğlu's proposal and said Bahçeli would not give up his principles for the sake of becoming prime minister.

The MHP is purportedly softening its stance on the AK Party taking into consideration recent remarks from two MHP deputies giving a green light to an alliance with the AK Party on certain terms.

Halaçoğlu said on Thursday that his party has revealed its conditions for a partnership with a party and their concession is out of the question. He highlighted ending the reconciliation process the government has been pursuing with the PKK to end the Kurdish question and also said his party stipulates fighting corruption as conditions for forming an alliance. Halaçoğlu said another demand that the MHP will not concede is making sure President Recep Tayyip Erdoğan remains within the boundaries of the Constitution during his tenure. "Amid these principles, if the AK Party wants to form a coalition with us, of course we will negotiate with them," Halaçoğlu said.

The MHP has been obstructing the process of forming a government since the election results became clear. It revealed that it did not favor a coalition with the AK Party and that it will not be part of a plan that involves the HDP. This attitude, which leaves only a few options available, now seems to be shifting its rigid stance toward the AK Party.

MHP Vice Chairman Mevlüt Karakaya also hinted at an AK Party-MHP coalition, saying that there can be no coalition government without the AK Party. Speaking to the BBC Turkish service, Karakaya said: "The election results showed that the Turkish people elected 258 deputies from the AK Party and gave the message to the AK Party that 'you will no longer be in charge by yourself.' "

Earlier this week, Bahçeli criticized Kılıçdaroğlu's remarks when he said three parties, that received 60 percent of the total vote, should form the government. Bahçeli said the MHP will not be included in a coalition government with the HDP. "How can we form a government with the political messenger of a terrorist organization that ruthlessly kills babies, soldiers, police officers and thousands of innocent citizens?" Bahçeli said, noting that the MHP will never be on the same side with organizations that he claimed threaten the unity of the state. He underscored that the CHP should not waste its time trying to persuade the MHP to form a coalition government with the HDP, and said doing so would do Turkey wrong.

On June 7, the HDP passed the 10 percent election threshold with 12.96 percent of the vote, marking the first time it will enter Parliament as a party. It is accused of having relations with the outlawed PKK, which has carried out terrorist activities against Turkey for over three decades resulting in the deaths of around 40,000 people. Turkey, the U.S. and the European Union list the PKK as a terrorist organization.

The AK Party received the most votes in its fourth consecutive general election on June 7 to claim 258 seats in Parliament, 18 short of a simple majority, according to the official results. Although the AK Party received 40.66 percent of the vote, the support it gained from voters was not sufficient for the party to reach the majority needed to form a government on its own, which has led it to seek a coalition partner.