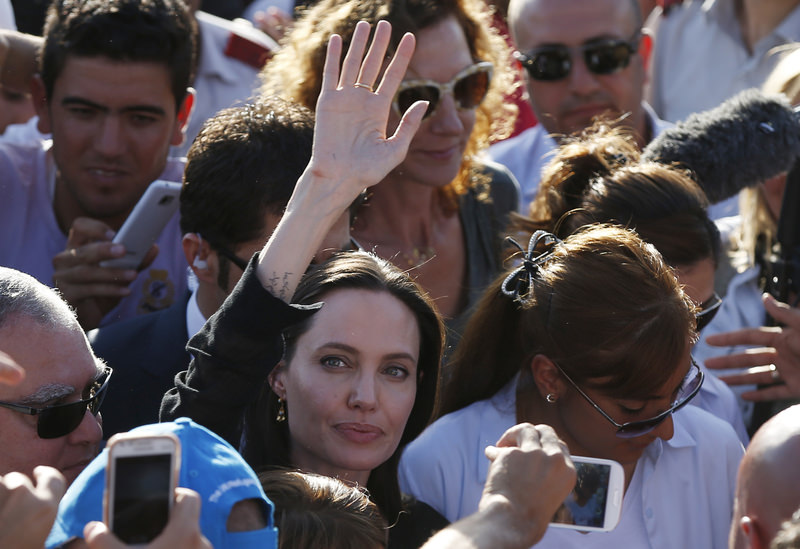 by Mehmet Çelik Jun 21, 2015 12:00 am
President Recep Tayyip Erdoğan, the United Nations High Commissioner for Refugees, Antonio Guterres, as well as the Oscar-winning American actress and the UNHCR Goodwill Ambassador Angelina Jolie attended several events on Saturday in the southeastern province of Mardin as part of June 20 World Refugees Day.

Turkey's open-door policy and generosity in hosting the nearly 2 million refugees fleeing from the conflict zones in Syria, Iraq, and Afghanistan was hailed on Saturday by the UNHCR chief, Antonio Guterres, as well as the Oscar-winning American actress and the UNHCR Goodwill Ambassador Angelina Jolie during a press conference on Saturday, after they visited a refugee camp built by the Prime Ministry Disaster and Emergency Management Authority (AFAD), which hosts nearly 5,500 Syrian and Iraqi refugees, in Mardin's Midyat district.

"Turkey is the largest refugee hosting country in the world and has a very generous policy in providing help to those in need, showing deep solidarity with refugees in a world people are not being supported," said Guterres during the conference, praising Turkey's efforts to help the refugees within its borders.

Turkey's efforts in providing help to refugees and keeping its borders open has been exemplary in a time where countries have closed their borders to those in need, said the UNHCR chief, criticizing the international community's inability or unwillingness to prove the necessary aid to international humanitarian groups as well as to countries such as Turkey, where a high influx of refugees has been witnessed.

"The international community has failed twice" said Guterres."First they failed to the solve problems that started the conflicts and then prevent them; secondly, they have failed to provide necessary help and maintain the dignity of the people affected by these conflicts," he added.

Guterres called on the international community to show stronger solidarity with refugee-receiving countries such as Turkey and to open all borders for refugees.

There were 60 million people displaced in 2014, half of which were children, said the UNHCR chief, and added that "The world stability is falling apart, leaving a wake of displacement on an unprecedented scale."

"May all international communities be like Mardin," said Guterres, highlighting the province's rich culture of coexistence and the support it has shown to refugees.

Meanwhile, the American actress and director Jolie thanked Turkey for keeping its open-border policy and hosting nearly 2 million Syrian refugees over the past four years.

"It is due time for people to respect the refugees' sufferings and hold their values in high esteem. They are not a problem. They are part of a solution to the world crisis," said Jolie.

Jolie also called on the international community and the leaders of the world powers acknowledge the crisis of the mass worldwide displacement.

"It is not your job to fund displacement but it is your job to end it," added Jolie, while she invited the U.N. Security Council member states to send their ministers to crisis zones to "see that it cannot simply go on. It is time for a political solution to end the conflict," she said.

Jolie also said that she has been putting in effort to increase awareness among the public of western countries by raising the media coverage of the refugee crisis and that she also holds meetings with western world leaders, in addition to visiting refugee sites in the conflict zones.

AFAD President Fuat Oktay thanked Guterres and Jolie for their sensitivity to the refugee crisis and invited the international community to share the financial burden of refugees and urged other states to keep their borders open to incoming refugees.

"Turkey has spent nearly $6 billion, while it has received around $400 million in support from other countries," Oktay said.

In his speech during the iftar dinner, President Erdoğan criticized the countries closing their borders to refugees, calling it a "crime against humanity," while highlighting the lack of support provided by other countries to Turkey's refugees response.

"There are nearly 2 million refugees in Turkey, while this number is not even 200,000 in Europe as a whole," the president said as he highlighted Turkey's stance toward the oppressed.

"We have not abandoned the oppressed at the hands of the cruel and we never will," Erdoğan said and added that Turkey has not discriminated towards any ethnicity while offering its helping hand.

President Erdoğan also slammed the states that have been ignoring the demographic changes being made by PKK-affiliated Kurdish group PYD after taking over Tal Abyad in Syria, which is on the Turkish border. The clashes between the Kurdish group and the Islamic State in Iraq and al-Sham (ISIS) have displaced thousands in Tal Abyad, causing more than 20,000 refugees to escape to Turkey.

According to recent U.N. figures, Turkey hosts nearly 2 million Syrian refugees who have fled the civil war in Syria, which has been continuing for over four years, in its 25 camps built by AFAD. The camps have received several awards and been praised by the international visitors for their effort in providing sustainable services. The largest camp is in Suruç, in the southeastern province of Şanlıurfa, which opened in February 2015 and hosts nearly 25,000 refugees.
Last Update: Jun 21, 2015 10:44 pm
RELATED TOPICS