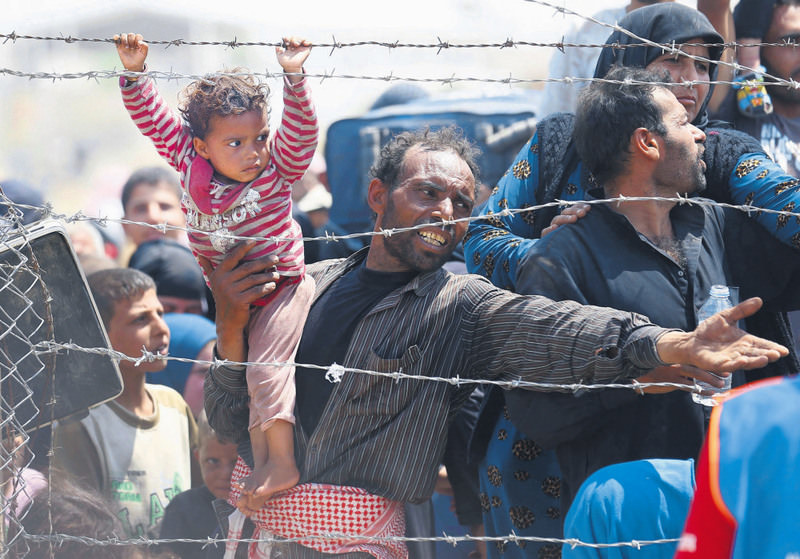 The mayor of a town that borders PYD-controlled parts of Syria said he survived four assassination attempts by the PYD, which he accuses of ethnic cleansing not only in Syria, but also in Turkish border towns, with threats and attacks against Arabs and Turks

Menderes Atilla, the mayor of the southeastern district of Ceylanpınar, which has a critical location due to its proximity to troubled Syrian regions, accused the Democratic Union Party (PYD), which is the Syrian wing of the PKK terrorist organization, of trying to ethnically cleanse Ceylanpınar. The group hasz been accused of ethnic cleansing across the border in Syria. In an interview with Turkish newspaper Sabah, Atilla, who has escaped four assassination attempts in the past 15 months, said: "They [PYD] are trying to turn Ceylanpınar into a place where only a Kurdish population lives."

Linking the assassination attempts on himself to the PYD's goal of having a voice in Ceylanpınar, Atilla said that the PYD aims to implement an ethnic cleansing campaign just like it has reportedly done in the Syrian city of Ras al-Ayn, which borders Ceylanpınar, in order to remove Arabs from the district.

Atilla claimed that 50,000 Kurds have settled in Ras al-Ayn and an assimilation campaign has been conducted with the PYD's takeover. He further said that before the PYD took Ras al-Ayn under its control, nearly 80 percent of the district was Arab while five percent was Circassian and 15 percent was Kurdish.

The Arab-origin mayor also shared a National Intelligence Organization (MİT) report saying that Atilla and his family's possible leaving Ceylanpınar may decrease the 45 percent Arab population in the region to 15 percent considering the increased tribal and ethnic ties in the region.

"My family and I have been in a fight with this terrorist organization for years. The PYD thinks that if it kills me, no one will be able to hold the mayor seat except those from the [pro-Kurdish People's Democratic Party] HDP. So, they will also manage to surpass [the civilians in the district]," Atilla claimed, adding that his death may turn the district into somewhere like Cizre or Silopi, southeastern districts witnessing PKK threats and pressure.

On June 11, plans for an assassination attempt on Atilla came into the surface when a Syrian citizen, Kelesh C., who was caught while revealing a buried bomb, claimed that he got orders to assassinate Atilla from the PYD. Pointing out the recent ethnic cleansing allegations in the Syrian city of Tal Abyad, Atilla claimed that Arabs and Turkmens in Tal Abyad now face ethnic cleansing, segregation and assimilation.

On June 15, the PYD's People's Protection Units (YPG) along with a contingent from the Free Syrian Army (FSA) took control of Tal Abyad from the Islamic State of Iraq and al-Sham (ISIS). The operation against ISIS in Tal Abyad raised concerns for Ankara, while it purportedly aimed to push ISIS militants out of the town it has also forced ethnic Turkmens and Arabs out, leading them to evacuate the town. On the same day, more than a dozen Syrian opposition groups urged the PYD in Syria to stop committing "ethnic cleansing" against Arabs and Turkmens in northern Syria while Turkish officials raised concerns over the ethnic cleansing by the PYD and YPG.

The mayor further hailed President Recep Tayyip Erdoğan, saying that he is the only hope of those oppressed ethnics in the region.

Ankara, which considers the YPG to be a terrorist organization, is worried that the vacated town will be filled with the PYD's YPG forces and their presence close to the Turkish border could put its security under threat. The president, on June 13, voiced his concern over a demographic change in the region and expressed his reservations about the operation, which he doubts only targets ISIS.

Turkey's stance against the PYD has been strict since the U.S.-led coalition, which also includes Turkey, was formed to fight ISIS. While the U.S. was providing assistance to Kurds fighting ISIS, Ankara refrained from extending help to those it designates as terrorists. Instead, the Turkish government came up with various ideas to cement cooperation in the fight against ISIS, one of which was to use peshmerga fighters from northern Iraq's Kurdistan Regional Government (KRG) in the fight for Kobani and allow their passage through Turkey to Syria.

Regarding the PKK's pressure and threats against people in eastern Turkey, especially during the June 7 parliamentary elections, the mayor said that if a completely free-willed election was performed in the region, the HDP would not be able to garner even 4 percent of its current votes that led the party to enter by passing the 10 percent election threshold. Atilla claimed the PKK's pressure and threats against locals was a reason behind the HDP's ability to be represented in Parliament.
Last Update: Jun 23, 2015 1:40 pm
RELATED TOPICS