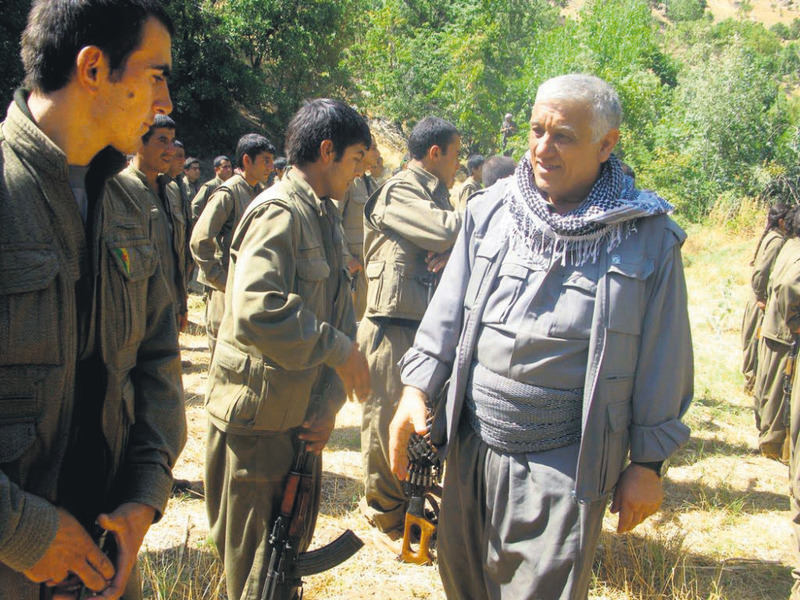 by Ayşe Şahin Jun 22, 2015 12:00 am
Senior figures of the outlawed PKK continue to voice their political opinions regarding coalition discussions while the Peoples' Democratic Party (HDP), which passed the 10-percent election threshold, remains passive in the debates. The PKK, which grabbed the chance to pursue their cause through democratic means with the HDP entering Parliament, has resisted laying down arms, and in a huge discrepancy, Cemil Bayık (right), a member of the PKK administration in Iraq's Qandil Mountain, has warned the Nationalist Movement Party (MHP) to adopt language that "does not engage in 'othering'," or else the party will vanish from politics sooner or later, he said.

"The MHP cannot remain in politics any more with the language it has been using for decades. It has to change. If Turkey will reach peace and stability, it has to pay respect to all political views, and all segments of the society. It has to adopt a language that does not 'other,' but instead embraces all communities regardless of faith and ethnic identity," Bayık said, speaking to ANF news agency.

The MHP has been portraying a firm attitude against the HDP since the elections, which gave none of the parties sufficient power to rule alone, especially as they commenced discussions on possible coalition options. However, the MHP, which stringently rules out any option that involves the HDP due to its ideology, is at the edge of causing a political deadlock that might eventually bring the option of early elections to the table.

Bayık's remarks came after the MHP's refusal to be part of an opposition bloc that has been proposed by the Republican People's Party (CHP). CHP Chairman Kemal Kılıçdaroğlu had even offered the Prime Ministry to MHP leader Devlet Bahçeli to soften his stance toward being part of the bloc, as without the MHP, the CHP and the HDP cannot constitute a majority to form a coalition government. Bahçeli considered the proposal as "empty talk" and that they will never side with a party that he equates with terrorism.

Bayık continued: "If it does not give up its previous language, tone and attitude, it becomes a party that does the greatest harm to Turkey. Thereby, the MHP has to alter its mindset and politics within the perspective of Turkey's realities."

Bayık also suggested that the CHP also has to change. He said since it is the most rooted party in Turkey, it will be held responsible for what Turkey goes through.

The PKK has been involved in political discussions since the onset of the election campaigns and has been trying to direct the HDP to reflect their desired positions.

Although the HDP desperately tries to detach itself from the PKK and tries to portray itself as an independent political party and as a mediator of the reconciliation process, the PKK's incessant comments, criticism, support and suggestions regarding the party could mean that the HDP is under considerable influence by the PKK.

Ruling party officials warned the public before the elections not to be deceived by the peaceful rhetoric of HDP Co-Chair Selahattin Demirtaş, claiming that those who vote for the party are voting for the PKK in northern Iraq's Qandil Mountains, citing that they receive orders from there.

The warning could be a well-founded, as the PKK is making its presence felt with the strong statements it has been delivering.
On the night of the elections, Demirtaş said they were aware that there were custodial votes given to them and that they would do whatever they could to preserve them. Shortly after the remarks, Demirtaş was warned by a senior PKK figure, Mustafa Karasu, who spoke to Nuçe TV a day after the elections and objected to the use of the term "borrowed votes" by Demirtaş. Upon the implicit criticism, Demirtaş changed his discourse and said: "We have not passed the threshold with borrowed votes. We have a strong base."

HDP Co-Chair Figen Yüksekdağ said on June 15 that the HDP is open to coalition demands. However, following the remarks, a PKK figure, Duran Kalkan, said the party cannot be part of a coalition before imprisoned PKK leader Abdullah Öcalan is released.

The PKK's second-in-command, Murat Karayılan, criticized Demirtaş for being narrow-minded as he has been closing his doors to the AK Party for a coalition.

The HDP's resistance to call on the PKK to lay down arms has also raised questions over its influence on the organization. Demirtaş, who is expected to push the reconciliation process further as promised, said it was not up to him to make the call.
The PKK leadership later released a statement and said they would not lay down arms without Öcalan being liberated.
Last Update: Jun 22, 2015 10:27 pm
RELATED TOPICS