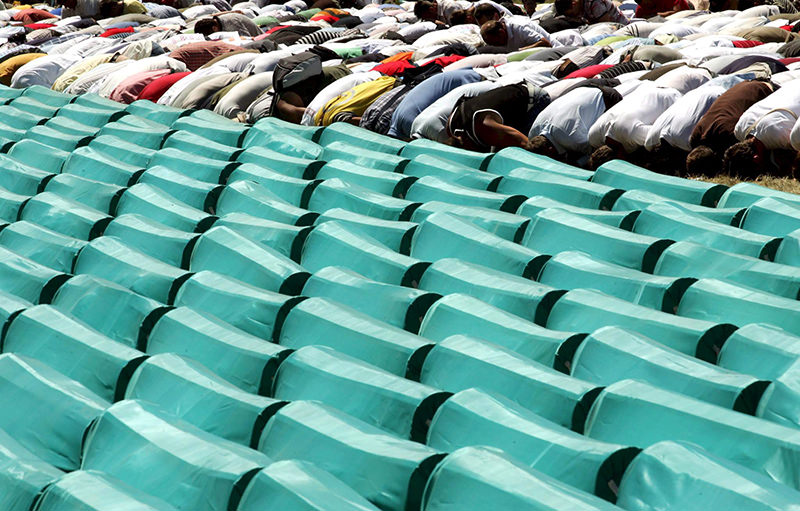 Bosnian Muslims praying near coffins at the Potocari Memorial Center during the burial of 308 Bosnian Muslims killed by Bosnian Serb forces in Srebrenica. July 2015 marks the 20-year anniversary of the Srebrenica Massacre (EPA Photo)
by Daily Sabah with Agencies Jun 22, 2015 12:00 am
Turkish Prime Minister Ahmet Davutoğlu is planning to pay a one-day visit to Bosnia and Herzegovina on the anniversary of the Srebrenica Genocide on July 11.

According to sources, Davutoğlu will be attending the commemoration ceremonies and will hold bilateral talks with world leaders who will also be there.

Prime Minister Davutoğlu will also meet with families of the victims in the Bosnian city of Zepa following the ceremonies.

During the ethnic war in Srebrenica, which had been declared as safe zone by United Nations, the city was captured by Bosnian Serbian troops under the command of Gen. Ratko Mladic on July 11, 1995. Dutch soldiers serving under UN command left the area, leaving the Bosniac Muslims at the mercy of Mladic's troops.

Serbian President Tomislav Nikolic apologized last year for "all crimes committed by Serbs" during the war in Bosnia. But he refused to call the massacre in Srebrenica a "genocide."
Last Update: Jun 22, 2015 6:36 pm
RELATED TOPICS