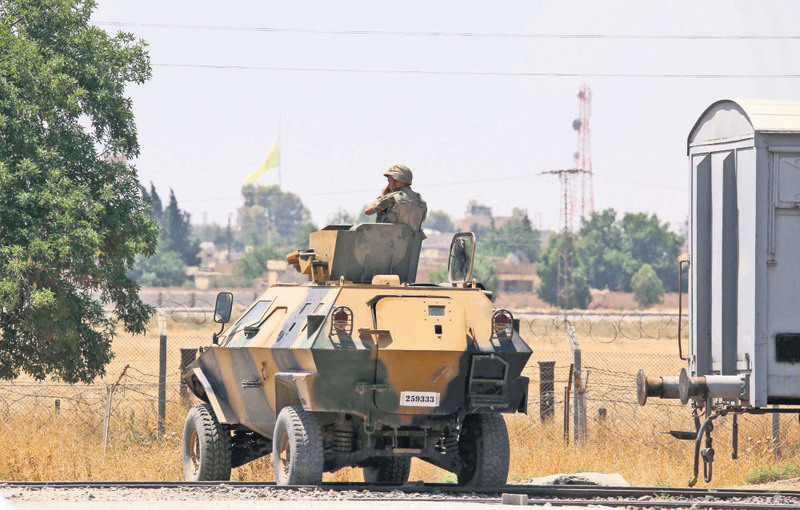 Any separatist tendencies in Syria pose serious security risks to both Turkey and the entire region, decided the government and resolved to strengthen the internationally-recognized Free Syrian Army to prevent the PKK’s Syrian wing PYD’s attempts to create an autonomous enclave in the north

Frustrated with the little attention to the PKK-affiliated Democratic Union Party's (PYD) alleged attempts to make northern Syria a Kurdish-only region through reported ethnic cleansing of Turkmens and Arabs, Turkey has reportedly drawn two different road maps to gird itself against the activies of both the Islamic State of Iraq and al-Sham (ISIS) and PYD and protect Syria's structure. According to sources who spoke to Turkish newspaper Sabah, the PYD, seeking to bring together its cantons after its armed People's Protection Units (YPG) along with Free Syrian Army (FSA) factions took control of the northern city of Tal Abyad from ISIS, has pushed Ankara to take new steps to protect Turkmens and itself from the PYD, which it considers to be an offshoot of the PKK terrorist organization. One of the points on the alleged road map is that the Turkish Armed Forces (TSK) is creating a safe zone in northern Syria to push back ISIS and to allow the FSA control the region. The other option is reportedly lending strong support to the FSA to take control of the regions held by ISIS and those controlled by the PYD. With ISIS and the PYD at its door, Turkey's General Staff and other security officials are reportedly working on scenarios that could erupt when the TSK begins creating the safe zone in Syria.

The PYD announced in November 2014 that all Kurdish areas in northern Syria would declare the regions autonomous as cantons, which are not internationally recognized. "This time the people in the bombed places were ethnically cleansed by the PYD and the YGP, as well as ISIS, these are strange relationships and alliances. … We are seeing signs of work that is underway on a formula to bring together the cantons," Deputy Prime Minister Bülen Arınç recently claimed.

The continuous atrocities committed by ISIS and its alleged role in the pre-election bombings that took place at the pro-Kurdish Peoples' Democratic Party's (HDP) Diyarbakır rally, had angered Turkey already and the terrorist organization's constant attacks on internationally recognized Syrian opposition groups that fight forces loyal to Syrian President Bashar Assad is another reason that has pushed Ankara to draw a greater road map for its current Syria strategy.

Ankara has continuously said that a comprehensive strategy that includes safe and no-fly zones in Syria along with training opposition groups is necessary for a permanent solution to the war in the neighboring country.

Recently, Nationalist Movement Party (MHP) Chairman Devlet Bahçeli extended his support to the government and said that a buffer zone should be established on the Syrian border. Bahçeli claimed the U.S.-led coalition airstrikes assisted the YPG and PKK's advance and, therefore, put Turkey under siege by terrorist organizations. Expressing the establishment of a passageway between Kobani and Jazeera, he claimed that the PKK was unifying the PYD's cantons: "The PKK is unifying cantons and thus establishing the western part of a greater Kurdistan. There is a so-called war against ISIS, however our Turkmen brethren are in a miserable condition. The international community is silent against these atrocities. Tal Abyad is on fire, Turkmens are being forced to immigrate. The PKK is committing ethnic cleansing."

Affirming that the protection of Turkmens is a matter of honor for Turkey, he said: "It is essential to take precautions against the unchecked influx of refugees and ongoing forced immigration caused by the U.S.-PKK alliance. No one will be able to risk Turkey's security. The so-called Kurdistan that lies between northern Iraq and the Mediterranean is like a chemical attack against Turkey. We will never allow it to be accomplished. This issue is of the highest order, it transcends parties and it is a matter of national security. People who are acting like the president of Syria or Egypt must immediately show the honor to protect Turkey's rights. There is no time for latency or delay. If Turkey does not break this siege, rupture and internal instability is inevitable."

Creating a humanitarian safe zone in Syria would entail a "major combat mission" requiring U.S. troops to fight militants and the Assad regime, U.S. Secretary of Defense Ashton Carter told lawmakers last month. Turkey has long called for a safe zone to be set up along the Syrian-Turkish border to protect civilians, but U.S. President Barack Obama's administration has yet to endorse the idea. Carter emphasized the challenges involved in establishing a buffer zone and warned that other regional governments might not be ready to contribute to the effort.
Last Update: Jun 23, 2015 8:29 pm
RELATED TOPICS