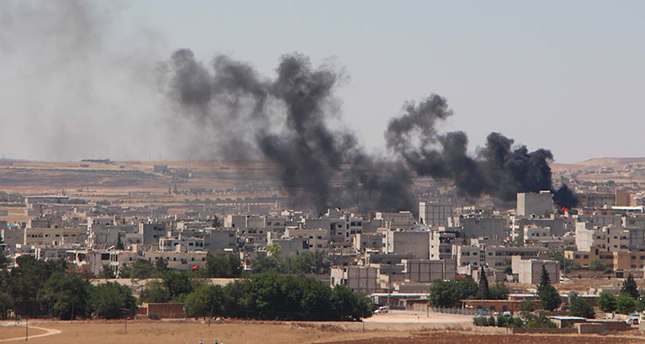 Passing through the northern Syrian town of Jarablous with uniforms resembling those of Kurdish forces, ISIS militants once again advanced into Kobani, killing at least 146 civilians so far. The pro-Kurdish HDP and several media outlets once again exploited the terrorist attack for their political gains

Passing through the northern Syrian town of Jarablous wearing uniforms resembling those of Kurdish forces, militants of the terrorist Islamic State of Iraq and al-Sham (ISIS) once again advanced into Kobani on Thursday after being driven from the area by the PKK-affiliated Democratic Union Party's (PYD) armed People's Protection Units (YPG) at the end of January. The attacks were launched at three different points, killing at least 146 people and leaving a 100 others wounded in five explosions according to a activist monitoring group, making it the second-biggest massacre in Syria.

Following the attacks, the pro-Kurdish Peoples' Democratic Party (HDP) and several international media outlets accused Turkey of abetting the ISIS militants, claiming that the attackers passed through the Mürşitpınar border crossing in the Suruç district of Şanlıurfa province. Despite being one of the first countries to list ISIS as a terrorist organization, deporting over 1,400 people thought to be foreigners seeking to join ISIS by passing through Turkey, blacklisting over 13,000 people's entrance into Turkey, taking in almost 1.7 million Syrian refugees, half of whom are believed to be Syrian Kurds, allowing northern Iraq's Kurdistan Regional Government's (KRG) peshmerga forces to pass through Turkey to drive ISIS out of Kobani, Turkey has once again been at the center of accusations of blatantly supporting ISIS.

The attacks came when Turkey expressed its concerns that U.S.-led airstrikes were helping the PYD to allegedly drive out the Turkmen and the Arab population of northern Syria to create a Kurdish-only zone. HDP Co-Chair Figen Yüksekdağ recently visited Basel, Switzerland for a Kurdish meeting where she openly said their intention is to build a "Kurdistan like in Iraq," although she claimed that it is not the right time for it yet.

HDP Co-Chair Selahattin Demirtaş had previously made the same allegations when ISIS was in control of Kobani, and later in October, he called HDP-supporters to take to the streets, which led to the loss of 50 lives in October when pro- and anti-PKK groups clashed. Attempts to link terrorist attacks in Kobani to Turkey have been interpreted by some as a first step of another HDP-driven chaos in southeastern regions of the country.

Ankara, which considers the YPG to be a terrorist group, is worried that the vacated town will be filled with the PYD's YPG forces and their presence close to the Turkish border could put both its border and domestic security under threat. President Recep Tayyip Erdoğan voiced his concern over a demographic change in the region and expressed his reservations about the U.S.-led coalition's airstrikes, which he doubts only targets ISIS.

The PYD announced in November 2014 that all Kurdish areas in northern Syria would be declared autonomous cantons, which are not internationally recognized. "This time, the people in the bombed places were ethnically cleansed by the PYD and the YGP, as well as by ISIS, these are strange relationships and alliances. … We are seeing signs of work that is underway on a formula to bring together the cantons," Deputy Prime Minister Bülen Arınç recently claimed.

A source in the Syrian Kurdish security forces told Anadolu Agency on condition of anonymity that ISIS militants mounted the two bomb-laden vehicles while disguised as YGP soldiers. Fierce clashes followed the blasts in Kobani. Nearly 150 wounded people were brought to hospitals in Turkey for treatment.

Some international media outlets, including Reuters and the BBC, claimed that the ISIS militants had entered Kobani through Turkey's Mürşitpınar border crossing in the Suruç district of the southeastern Şanlıurfa province. The claims were strongly denied later throughout the day by Turkish officials. Video footage refuting the allegations was later provided by Anadolu Agency. Later YPG spokesperson Redur Xelili also confirmed that ISIS terrorists entered Kobani from the Jarablous side, not Turkey. Those wounded in the blasts were rushed through the Mürşitpınar crossing into Turkey and taken in ambulances to Suruç State Hospital and other facilities in Şanlıurfa, the Şanlıurfa governor said.
Deputy Prime Minister Numan Kurtulmuş has dismissed allegations claiming that the ISIS militants entered Kobani from Turkey and said such claims were lies spread as part of a defamation campaign. Kurtulmuş made a series of statements on his Twitter account.

"Turkey has been on alert for the injured and refugees from Kobani requiring immediate attention since the attack took place," Kurtulmuş said, adding that the Şanlıurfa Governorate and the Prime Ministry Disaster and Emergency Management Authority (AFAD) have taken the necessary precautions to provide assistance to those injured and affected by the violent attack.

Turkey has been doing its part to identify and deliver potential foreign ISIS fighters who are seeking to cross the border to Syria to join ISIS, despite little cooperation in intelligence sharing by Western countries.

As part of Turkey's efforts, the police force has tightened security at transfer points such as airports, terminals, bus stations and rental car companies with a special risk analysis system and with the help of a team tasked with tracking suspicious foreigners who travel to Turkey for the first time and those who are minors with no hotel reservations.

The police counterterrorism unit, intelligence unit and airport security teams have cooperated in sending back hundreds of foreigners whom they consider to be a security risk. A total of 34 foreigners who arrived in Turkey last month were questioned by profiling experts after their arrival.

Those deported were of different origins, with ages varying from 15 to 35. The suspected foreign militant hopefuls claimed that the purpose of their visit was work-based, tourism or visiting friends or relatives, but security forces who had suspicions about the possibility of them joining ISIS deported them to their countries of origin.
Last Update: Jun 26, 2015 9:27 pm
RELATED TOPICS