Mixed voices rise from CHP over coalition with AK Party 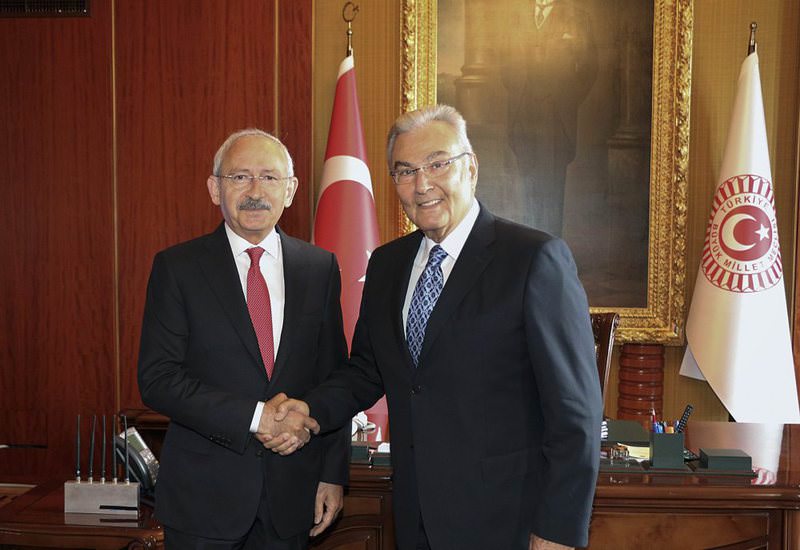 With the uncertainty of which parties will negotiate to form a government continuing, there has been controversial intra-party remarks from the CHP, which complicates the already tough job of forming a coalition between parties with distinct differences

Refraining from completely turning his back on a partnership with the Justice and Development Party (AK Party), Republican People's Party (CHP) Chairman Kemal Kılıçdaroğlu has said a coalition with the party is a "low possibility." On the other hand former chairman and Antalya deputy Deniz Baykal who was recently nominated as Parliament speaker from the CHP said his selection for the position might open a door for partnership between the AK Party and the CHP.

The ambiguity over which parties will come together to form a coalition government has not been alleviated since the June 7 elections, which gave no party sufficient power to rule alone. The rigid differences between the parties are making an alliance difficult, especially after the opposition parties voiced they would not form a government with the AK Party, the party that received the most votes in the election.

As the options are narrowing down, party leaders are softening their stance toward the AK Party, but the picture will be clearer once the president assigns interim Prime Minister Ahmet Davutoğlu to form a government. Before he began to look for a partner and negotiate the terms stipulated by parties, Kılıçdaroğlu said he considered the odds low for an AK Party-CHP coalition.

His remarks came after the CHP nominated Baykal as its candidate for speaker of Parliament. His candidacy has been deemed as an indicator of an AK Party-CHP coalition and Baykal supported the claim saying his becoming Parliament speaker could pave the way for the partnership.

"My becoming the speaker contributes to the normalization of Turkey and culture of reconciliation. In addition to that, it could open the door for an AK Party-CHP coalition. Because choosing a speaker from the opposition is perceived as a gesture," Baykal explained. He said: "This softens the polarization in politics that has been going on for years."However, Kılıçdaroğlu, following a CHP meeting on Wednesday, said: "His being the speaker has nothing to do with the matter of a coalition. It has to do with the choices of lawmakers. We believe we will receive support from each party." "It is not right to consider this matter as part of the coalition negotiations. Nothing has changed before Baykal's candidacy and after," he added, explaining that the two should be evaluated separately.

Kılıçdaroğlu further noted it was unlikely that the AK Party and CHP would form a coalition. Kılıçdaroğlu recently gave a green light to AK Party after the Nationalist Movement Party (MHP) dashed his hopes of a coalition government that excludes the AK Party. MHP Chairman Devlet Bahçeli said his party would not be part of a plan that involves the Peoples' Democratic Party (HDP), which they claim is controlled by the outlawed PKK.

Kılıçdaroğlu even offered Bahçeli the job of prime minister to coax him into a partnership, a proposal Bahçeli rejected on the grounds his party does not pursue trivial ambitions and would not give up on its ideology in exchange for rank.

After these developments, the CHP, which received the second-highest number of votes in the June 7 parliamentary elections, has two options left on the table to assess: Either they become the main opposition to an AK Party-MHP coalition government or they will consider an alliance with the AK Party. Kılıçdaroğlu purportedly aims to try his hand with the AK Party as a last resort to be part of the coalition.Responding to the likelihood of forming a coalition with the AK Party, Kılıçdaroğlu said on Sunday: "We don't know what [Ahmet] Davutoğlu thinks. We should listen to him and see what he thinks. In either condition, we retain our conditions. There are certain terms for a coalition between the CHP and the AK Party."

Kılıçdaroğlu outlined the CHP's position and the points necessary to form a coalition in a press conference last week. He said his party prefers a CHP-MHP-HDP coalition, which he named an opposition bloc. Although he refrained from taking a firm stance against siding with the AK Party, he has revealed his reluctance for such a partnership in almost all instances.
Last Update: Jun 25, 2015 8:14 pm
RELATED TOPICS