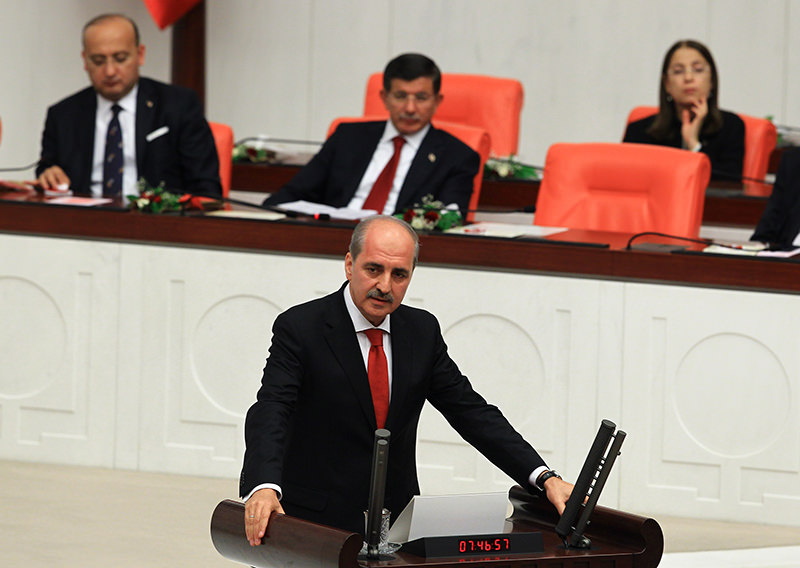 by Daily Sabah Jun 25, 2015 12:00 am
Turkish Deputy Prime Minister Numan Kurtulmuş has dismissed allegations claiming that the self-proclaimed Islamic State of Iraq and al-Sham (ISIS) militants entered Kobani from the Turkish side and said they were lies, spread as part of a defamation campaign.

Kurtulmuş made a series of statements on his Twitter account regarding the incident which took place early Thursday, killing at least 18 people and wounding 40 others in five explosions in the Syrian border town of Kobani.

"Turkey has been on alert for the injured and refugees from Kobani requiring immediate attention since the attack took place" Kurtulmuş said, adding that Şanlıurfa Governorate and the Prime Ministry Disaster and Emergency Management Authority (AFAD) have taken necessary precautions to provide assistance to those injured and affected by the violent attack.

The Turkish Deputy PM added that a total of 96 people who were wounded and four who died in the attack arrived in Turkish hospitals and that the injured are currently receiving treatment.

"I would like to call our citizens, journalists, NGOs and politicians to act responsibly during this sensitive period" Kurtulmuş said, who noted that this difficult situation will be overcome by assistance, solidarity, common sense and responsibility.

Kurtulmuş underscored that the government is closely following the issue and will continue to inform the public regarding the issue.

Some international media outlets, including Reuters and BBC, claimed that the ISIS militants that detonated multiple car bombs in the northern Syrian town of Kobani on Thursday claiming numerous lives, had entered the Syrian town through Turkey's Mürşitpınar border crossing in the Suruç district of the southeastern Şanlıurfa province. However, such claims were strongly denied later throughout the day by Turkish officials.

Turkey's state-run press agency AA released video footage, showing the baselessness of the allegations. The video shows that the car bomber in Kobani approached from Syrian side, contrary to media allegations that it entered from Turkey.

The video clearly shows the pick-up truck filled with explosives was never in Turkey prior to the bomb detonating. Turkey's Foreign Ministry strongly denied allegations that ISIS militants had come from Turkey, describing the claims as "lies".

The ISIS militants detonated a car at around 5 a.m. in the town of Kobani, according to a statement released by the Şanlıurfa province governor.

Indicating that the allegations that ISIS militants entered Syria through the Turkish border were untrue, the official statement said, evidence showed the militants were already in the Syrian town of Jarablus when they entered into Kobani.