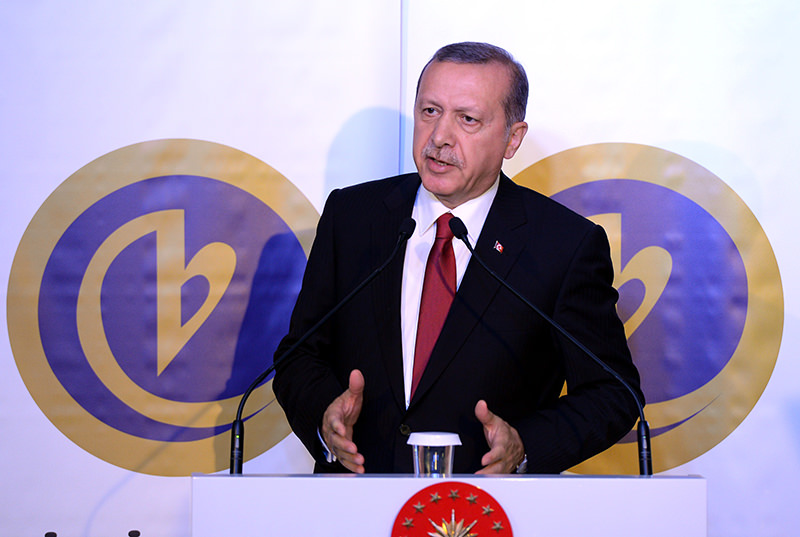 | AA Photo
by Nurbanu Kızıl Jun 28, 2015 12:00 am
President Recep Tayyip Erdoğan dismissed claims put forth by Nationalist Movement Party (MHP) leader Devlet Bahçeli through his Twitter account saying that nobody pays attention to the suffering of Uighur Turks in East Turkistan, while he criticized the latter for not paying any attention to the Uighurs during his tenure as deputy prime minister.

"Everybody talks about Kobani, but nobody mentions the Chinese brutality in East Turkistan," Bahçeli said on his Twitter account.

Bahçeli accused the Turkish government of being insensitive towards the suffering of people with Turkic origins.

Speaking at an iftar dinner on Saturday night, President Erdoğan dismissed Bahçeli's allegations and said that Turkey has always kept its doors open to the Uighur Turks.

"Did you ever visit the Uighur Turks in East Turkistan? No you didn't. But Tayyip Erdoğan did." said the Turkish president, who underscored that Turkey has accepted and conferred Turkish citizenship to hundreds of Uighur Turks who fled Chinese persecution.

"How many Uighurs did you accept –as citizens- when you served as a deputy prime minister?" Erdoğan asked Bahçeli.

In January, Turkey has accepted over 500 Uighur Turks, who sought refuge in the country.

According to a Uighur Human Rights Project report, 700 people were killed due to political activities last year. The number of those arrests increased 95 percent compared to the previous year, reaching 27,000.
Last Update: Jun 28, 2015 4:24 pm
RELATED TOPICS