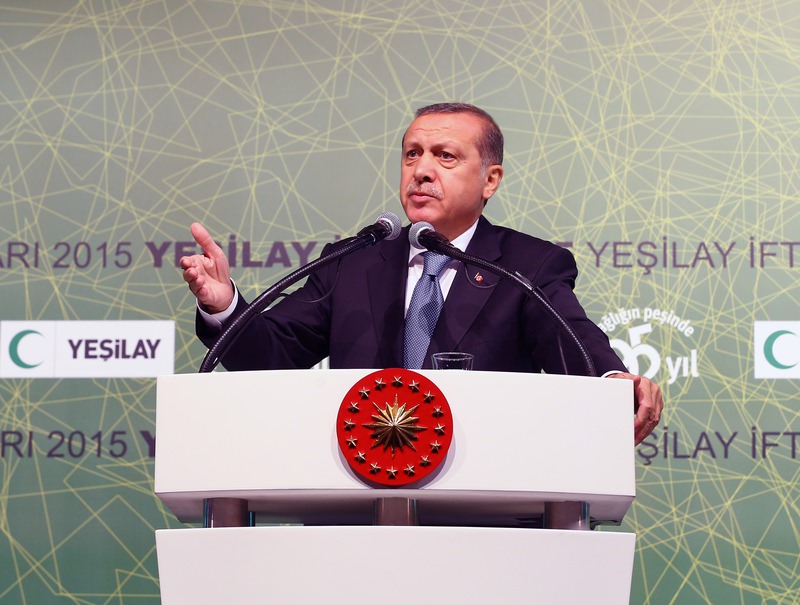 by Daily Sabah with AA Jul 03, 2015 12:00 am
President Recep Tayyip Erdoğan has said a new Turkish government backed by the majority in the parliament must be formed as soon as possible.

"I call on all political parties to take responsibility in this regard," Erdoğan said on Friday at an iftar organized by the Green Crescent (Yeşilay) in Istanbul.

He said that Turkey should not have to deal with any issues in forming a government at a time when vital regional developments were taking place. He also noted that Turkey was facing very serious problems in the region that required very important decisions.

He said that the people of Turkey had made their decision on June 7 by not giving the majority to any political party. But, he added that if the parliament did not succeed in establishing a government, then the country would head towards snap elections.

He says that he hopes Turkey will resolve the issue of forming a new government as soon as possible.

The Justice and Development (AK) Party led by Prime Minister Ahmet Davutoğlu came in first in the fourth consecutive general elections held on June 7 and secured the largest number of votes --with 41 percent -- and claimed 258 seats in the Grand National Assembly, 18 short of a simple majority in elections.

The Turkish president is awaited to give the mandate to form the new government to Davutoğlu, who will seek the support of at least one other party to govern the country in a coalition set up.
Last Update: Jul 04, 2015 12:26 am
RELATED TOPICS