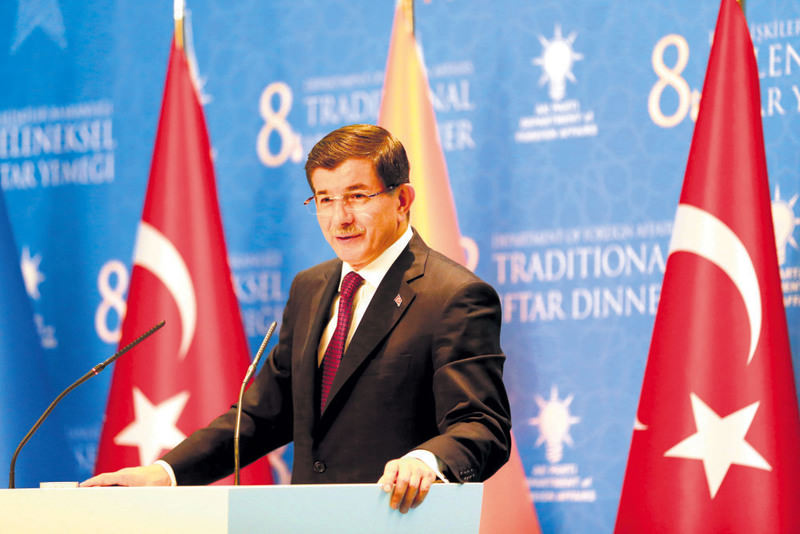 The options for a coalition government have narrowed to two before official negotiations have even begun, but early elections still loom as the remaining options could also fail during the talks due to lack of compromise between parties

While the future of Turkish politics remains an enigma as none of the parties have yet to compromise over a coalition, Prime Minister Ahmet Davutoğlu is about to commence his tour of talks with the opposition parties to agree on a partnership to form a government. The talks, which appear to be far from promising taking into account the irreconcilable stances the parties have adopted thus far could end with early elections. Davutoğlu, who is yet to be assigned by President Recep Tayyip Erdoğan to perform the task of forming a government, said late on Thursday that there are two options for a coalition.

"There are currently two viable options that could be mathematically applied. There will either be an AK Party-CHP [Justice and Development Party-Republican People's Party] coalition or an AK Party-MHP [Nationalist Movement Party] coalition. They have narrowed down the alternatives one by one, with the remarks they have uttered thus far. They vanished the chances before the talks even began," Davutoğlu said. He also added there could not be a political solution without the AK Party.

The AK Party's road map for coalition negotiations will reportedly be revealed in talks carried out simultaneously with the CHP and MHP in a month's time.

Following Erdoğan's authorization to Davutoğlu after the Bureau of the Assembly is formed in the forthcoming week, Davutoğlu will start his tour of coalition talks with other parties. In the first tour, rather than making a bid for an exact solution, approaches, demands and red lines of all the parties for a coalition government will be discussed.

Though the pro-Kurdish People's Democratic Party (HDP) is also on the agenda of the meetings, following the evaluation of the party's Central Executive Board (MYK) and Central Decision and Executive Board (MKYK), a second tour is expected to be made for talks with the CHP and the MHP since the party is not considering forming a coalition with the HDP.

Along with these tours, unofficial talks will be also be held simultaneously with the CHP and the MHP to try to prevent them from offering unwelcome demands.

Davutoğlu, in response to a reporter's question about whether his intention was to form a government or drag Turkey to early elections, said: "I will never start [talks] for a coalition to avert it. If that was our intention why would we carry out talks, confer with each other and form commissions?" adding that the rest is a matter of negotiations. He also said the nation has told the parties to form a government and that he would never act disrespectfully toward the will of the nation."I try to do what the nation tells me to do. But the other side fails to do so. If ultimately we head to the early elections, that too will be the decision of the nation. It is a matter of compromise and if it fails, we won't be the reason for it," Davutoğlu added.The first meetings of the negotiations will be carried out at the level of chairmen and next contacts will be through party staff. In this context, former Labor and Social Security Minister Faruk Çelik with his delegation will be responsible for talks with the MHP while the delegation led by former Culture and Tourism Minister Ömer Çelik will conduct talks with the CHP.

Speaking to journalists after the AK Party's eighth Traditional Iftar Dinner for Ambassadors on Wednesday night, Davutoğlu indicated that the possibilities of a coalition are being assessed by the three commissions established in the AK Party and underlined that they are aiming to motivate "mutual minds" through this.

It is reported that the political commission of AK Party completed its works in comparing pledges and election bulletins of all opposition parties with the ones of the party.
Last Update: Jul 03, 2015 7:53 pm
RELATED TOPICS